Tree Health In A Time Of Drought 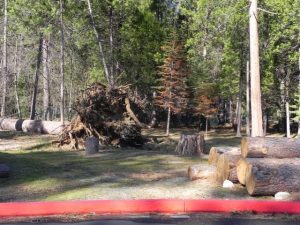 The fourth winter in a row of disappointing precipitation has triggered a die off of trees in the Sierra Nevada, most of which is now in ‘exceptional drought’ status. The US Forest Service conducted aerial monitoring surveys in April 2015 and observed a large increase in tree mortality in the Southern Sierra (from Sonora south). Surveyors flew over 4.1 million acres of public and private forest land and found that about 20% had tree mortality on it, totaling over 10 million dead trees.

The Forest Service found severe mortality in many pine species especially ponderosa pine. On private lands along the foothills of the Sierra, surveyors found extensive areas of dead pines. In the Stanislaus National Forest, areas with dead trees doubled since last year. Pine mortality, mostly caused by western pine beetle, was common at lower elevations. Over 5 million trees were killed in the Sierra and Sequoia National Forests, up from the 300,000 trees killed last year in the same area. Conifer mortality was scattered at higher elevation though surveyors note that the survey was conducted too early in the year to detect the full extent of mortality levels.

The insects killing trees in the Sierra are all native insects that are multiplying because of drought conditions. Native insects are a necessary part of the forest ecosystem and speed decay of wood back into nutrients, prey on other insects, and provide food for wildlife. They are normally present at low levels and cause tree mortality only in localized areas.

Drought weakens trees and reduces their ability to withstand insect attacks. Normally, trees use pitch to expel beetles that attempt to burrow into the tree through the bark. Weakened trees cannot produce the pitch needed to repel these beetles, so they are able to enter under the bark and lay eggs. Larvae feed on the tree’s inner bark cutting off the tree’s ability to transport nutrients. Attacking beetles release chemicals called pheromones that attract other beetles until a mass attack overcomes the tree. Many beetles also carry fungi that weaken the tree’s defenses.

Western pine beetle is one of the main culprits killing pines in the Sierra during this drought. It is a bark beetle, one of a genus of beetles named Dendroctonus which literally means ‘tree-killer’. Adult beetles are dark brown and about ¼ inch long. Western pine beetle often attacks in conjunction with other insects.

Other beetles causing tree mortality in the Sierra include mountain pine beetle, red turpentine beetle, Jeffrey pine beetle, engraver beetles (Ips) and fir engravers. Forests with a higher diversity of tree species are typically less affected because beetles often have a preference for specific tree species. Some species may attack only one tree type.

Signs that bark beetles are affecting a tree include pitch tubes (streams or tubes of pitch visible on the trunk), small holes through the bark, or boring dust. If the tree is extremely water-stressed and cannot produce pitch, boring dust may be the only visible sign. Trees with needles that have turned from green to red are dead. Most beetles have emerged by the time trees turn red.

The best defense against bark beetles is to keep trees healthy so they are able fight off insects themselves. Widely spaced trees are typically less susceptible to successful attack by bark beetles since they face less competition for moisture, light, and nutrients compared to densely growing and overcrowded trees. Forest health can be promoted by thinning to reduce overcrowding (so each tree has access to more resources) and removing high risk trees during thinning.

For landscape trees of high value close to a home, watering may be one option to increase tree vigor against bark beetle attacks. Apply about 10 gallons of water for each inch of tree diameter (measured at chest height) around the dripline of the tree once, or several times a month during dry weather.

For more information on bark beetles, visit the University of California Integrated Pest management at http://www.ipm.ucdavis.edu/PMG/PESTNOTES/pn7421.html