18 Newly Reported Covid Deaths In The Mother Lode This Week 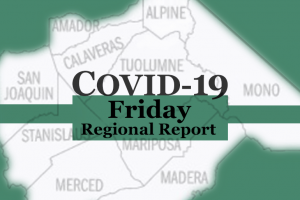 Tuolumne County Public Health for Saturday, February 26 through Friday, March 4th Tuolumne Public Health reports six newly confirmed Covid deaths, all men; one in his 90s, two in their 80s, two in their 70s, and one in his 60s. The Public Health team sends its condolences to their families and friends and notes, “some of the new cases being reported are reinfections from prior dates which often take longer to identify, investigate, and report. Therefore, while they are included in our total case count, they may not be reflected in the current 14-day case rate.”

There are 101 new community Covid cases, active cases decreased 31 to 59. Eight people where hospitalized with Covid this week. There are 64 new inmate cases at the Sierra Conservation Center. The California Department of Corrections and Rehabilitation (CDCR) reports four currently active inmate cases. Last week, including Saturday and Sunday there were a total of 140 new community cases, 16 new Sierra Conservation Center Inmate Cases, and no reported deaths.

You can help slow the spread of COVID-19 by self-isolating when you have symptoms or a positive test result. Also, notify any close contacts you’ve had from 2 days before you became ill or got tested. Any close contacts should follow current quarantine guidance and get tested 3-5 days after exposure. If you are at high risk of severe disease or hospitalization contact your doctor to discuss potential treatment options.

This week there are 42 new cases Saturday including seven new cases today. Active cases increased three to 21 including one Covid hospitalization. There are 32 more counted as recovered for a total of 7,061 and 57.26% of the eligible population is fully vaccinated in the county.

Mariposa Public Health reports six new deaths, also noting the information was delayed and comes “As hospitals continue to come down off of their surge and are able to provide more regular reports.” Health officials stated in their March 2nd update “we anticipate there may be additional deaths confirmed.” Todays, Friday update did not note any new deaths. There were eleven new cases today and a total of 33 newly reported cases Saturday through today.

COVID-19 Testing schedule an appointment at the LHI State Covid testing site at the Mother Lode Fairgrounds by going to www.lhi.care/covidtesting or by calling 888-634-1123.

COVID-19 Vaccine The CDC recommends people receive a booster shot if they completed a Pfizer series at least five months ago, the Moderna series at least six months ago, or a J&J vaccine at least two months ago. Vaccine appointments can be made through myturn.ca.gov by calling 833-422-4255 or through local pharmacies, more details are here. California is moving to an “endemic” approach with the “SMARTER Plan as detailed here.