Get a Start on Saving for the Next Holiday: Try Chris Hall’s Idea! 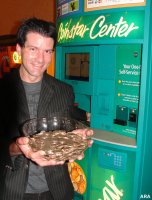 (ARA) – Feeling the strain from paying off holiday purchases? Christopher Hall has a secret to hidden wealth that can eliminate your post-holiday stress next year: save your green by paying with silver.

Hall, a stylist from Los Angeles, recently walked into an Albertsons supermarket in Costa Mesa, Calif., with $2,153 in coins, which he exchanged at a Coinstar self-service, coin-counting kiosk. He used the sum to start his own hair salon.

Such exchanges have become commonplace for Hall, who says he accumulates about $1,000 in change annually by paying cash for day-to-day purchases and saving all of the coins from every bill he breaks. The strategy has produced some handsome rewards. Over the past nine years, Hall says he has used accumulated change to fund down payments on a new car and house, and to record his own music album.

‘It’s a savings plan that puts absolutely no strain on your budget,’ says 33 year-old Hall. ‘Most people don’t see the value of coins because of their low purchasing power. But I think of coins as money, no different from larger bills.’

By not recycling his coins, Hall says he accumulates wealth rapidly and painlessly.

Hall says he researched other ways of redeeming his change, including selling it to a laundromat or delivering it to his bank, but chose Coinstar for the convenience and speed.

Three years ago, Hall converted $972 in change at a Coinstar machine to pay for half of a down payment on his new home.

‘It was like holding a winning Lotto ticket,’ he says.

‘A lot more loose change than we realize accumulates in our pockets, purses, dresser drawers, between sofa cushions, and in coin jars – in fact $10 billion now sits idle nationwide,’ says Gretchen Marks, vice president of marketing for Coinstar, the leader in self-service coin counting in America. ‘At an average of $99 per household, that might offer some bonus money right now!’

Coinstar is also streamlining gift giving by offering free coin counting on many of their machines when consumers convert their coins into gift cards such as Borders books, iTunes, Amazon, Starbucks and Eddie Bauer. Visit www.coinstar.com for the nearest coins-to-gift card location.

Sponsored by Peter M. Galde who is the founder and principal at Cornerstone Capital Funding, 14520 Mono Way, Suite 110, Sonora Ca. 95370. Peter has 28 years experience in the finance industry. E mail Peter or call him on 209 532 7711 for further information.