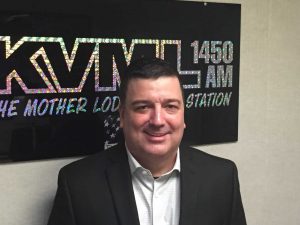 Sonora, CA – As more Mother Lode businesses continue to open and expand business development officials are sharing tidbits — and cautionary words for the year ahead.

Tuolumne County Economic Development Authority (TCEDA) Executive Director Larry Cope shares he is optimistic about some industrial deals in the wings relating to business expansions that he adds are nowhere near announcing but will likely mean more jobs.

Hoping to pair up a business for the gaping vacancy in Sonora Plana Shopping Center that housed the now-shuttered (as reported here) Orchard Supply Hardware, Cope says there are no deals yet and one could still be a couple months or more out. “We generally don’t do a lot of work in retail but when one of our larger buildings empties, we always look to refill it because it always helps the business that surround it,” he notes.

Asked for his thoughts the Jamestown Harley Davidson’s announcement this week that it is closing in January, he acknowledged the loss is unfortunate and that the location is a prime one. “I don’t expect that the building won’t take a lot of time to refill…but it needs to be filled with something that fits Jamestown and the community,” he confides.

On a brighter note, Cope points to the new expansion of Emberz restaurant in downtown Sonora, which took over a next door space that formerly housed The Cheezy Winer wine and cheese-centric cafe. “I happened to be by [Emberz] last night — and the renovation and everything looks great.”

Similarly, Tar Flat home goods and gifts owner Marianne Wright has nearly completed renovations of one of Sonora’s historic watering holes, Servante’s Saloon, which should be finished in time for a soft opening come mid-January. The reimagined saloon and retail space will incorporate Tar Flat items and make full use of the saloon’s unique, grandfathered on- and off-premise alcohol sales license. As reported here, plans were to open in the fall and the project has experienced its share of unexpected delays.

Cope also nods at Sonora City Council’s continued support for a planned microbrewery at Lighthouse Deli, which is under new ownership, as reported here. He also points to entrepreneur Doug Kennedy’s multi-million-dollar Sonora Armory and Green Dog Beer Company project, which as reported here, is nearly complete and up for sale due to a change in business plans. Cope comments, “We are introducing people to that particular building and letting them know that there is either an opportunity to buy it or partner with Doug on it.”

Kennedy shares with Clarke Broadcasting that construction activity is getting down to the nitty gritty final details, including an installation this week of a water feature. His plans are to focus more on marketing the property in the new year. He confides he is busy with ATLAS, his latest Studio Wildcard Company multiplayer online adventure game, and plans for a massive early access debut on Microsoft Windows. Current plans are for it to debut Saturday at 9 p.m. Pacific Time and for it to be available on Xbox One next year.

Cope cheers the new construction project by Safari Learning Center on Tuolumne Road next to the county’s 911 emergency center. “It is a beautiful building and it is going to allow them to expand…in addition to that bringing more much needed daycare to the area,” he states.

Another expansion in the works by Quest Diagnostics, which operates a current laboratory testing location near Sierra Vista Optometry, will bring a location to the Crossroads Shopping Center next to the T-Mobile store.

He lauds some other new paperwork submitted to the county earlier this month that will bring another multi-million-dollar development to the Yosemite tourism corridor by Rush Creek Lodge. Hardin Flat LLC’s Terra Vi Lodge, when finished, will include 140 guest rooms, 25 four-bedroom cabins, a market, lodge, and an event space, among other amenities.

What’s Jumpin’ At The Junction

Tuolumne County .Chamber of Commerce President-elect Margaret Davis, who is also The Junction Shopping Center’s longtime manager, confides that deals could be close to finalizing for at least one of the two other vacant spaces with perhaps an announcement coming in January of a new retailer.

The much anticipated Strings Italian Café whose operators plan to open in at The Junction in late winter or early spring, are still in the process of renovating the space that was formerly home to a Starbuck’s location. The self-described “great family Italian café , opened its first Strings restaurant nearly 40 years ago in Sacramento and the original owners operate well over a dozen locations in Northern and Central California, including one in Jackson. The menu features homemade pastas, pizzas, seafood dishes, and daily specials along with a selection of local wines.

Looking ahead to the new year, top of mind, Davis says, “I think really it is important to keep the businesses we have here.” Locally, and nationally, she opines, “The biggest thing we need to do is talk to each other. People can be Democrat or Republican and we can still talk — I don’t care who you are.”

Honing In On Opportunity Zones

Like Calaveras County, which as reported here, now has much of its District 2 as part of a newly designated Opportunity Zone, Tuolumne County has two approved Opportunity Zones that may become draws for investors and developers once the IRS completes rolling out its rules and regulations governing them.

As Cope outlines them, one of the zones encompasses East Sonora from the centerline of Washington Street to Greenley Road and then from Highway 108 to Columbia College. The second zone covers a broad area east of the Lake Don Pedro Bridge, east of Chinese Camp through Groveland and Big Oak Flat to Yosemite National Park. These areas were able to meet federal requirements for having disadvantaged population demographics using data from the 2010 Census.

Cope describes the zone areas as presenting fantastic opportunities for certain investors. “Right now, the rules have just been written and like most rules at the federal level it will take time to get them implemented,” he says. After that, it will take time for businesses to figure out how and what to submit as paperwork to the IRS as to properly meet the requirements and not trigger an audit.

“For the right projects, it allows you to roll over some of your cap gains…take profit from your business or from another business — and be able to roll it over into another area that needs more investment,” he explains. The beauty of Opportunity Zone investments, he stresses is, “At the same time that the community receives the benefit of the investment, the individual receives a tax break because they are able to shelter some of their income.”

Looking forward into 2019, Cope still sees some continued expansion when it comes to our large job producers, i.e. manufacturers. However, he warns, “I do believe, like a lot of people, that there are some clouds on the horizon and that we need to keep an eye on where the national economy goes.”

He adds, “A lot of things can change in a number of months if the federal government raises interest rates too high…we are seriously watching that over this next year. We are hoping that the federal government does the right maneuvers when it comes to where the national economy is, because it will definitely affect us locally right here.”

In summary, Cope stresses, “It has been a long expansion since the last recession…we are hopeful for at least another year’s worth of growth — but with clouds on the horizon, we are not so sure we will get another whole year out of it.”