Know Your Zones And Microclimates 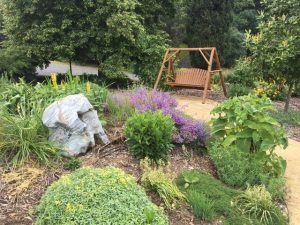 The long, cold, wet winter and prolonged heat last summer severely tested many of my plants, particularly those recently planted and not yet established. Fortunately, most are surviving because I played it safe by remembering the number 7. Seven is the number given to portions of the Mother Lode by the United States Department of Agriculture (USDA), the American Horticultural Society (AHS) and Sunset Publishing. They each assign climate zone numbers to help consumers make decisions about plant selection and placement. So when shopping for plants and confronted by hardiness zones, heat zones, and Sunset climate zones, do not be confused, just remember the number 7.

Cold Hardiness Zones developed by USDA give information about which plants tolerate various minimum temperatures with a good chance of wintering over and not being killed by the cold. It is the oldest and most widely used by national magazines and catalogues. According to USDA, those living in zone 7 have an average minimum temperature of 0 to 10 degrees while Zone 8 is 10-20 and zone 9 is 20-30 degrees. There are 11 cold hardiness zones; the lower the number, the colder it gets in winter. Plants will often be listed with 2 numbers indicating the range in which it flourishes. For example, nepeta x faassenii (catmint) is usually safely grown from zones 4 to 8.

Heat Zones were recently developed by AHS to provide information about plant reaction to heat. The zones are determined by average number of days over 86 degrees which is when many plants experience cell damage. In heat zone 7, 61-90 days are over 86 degrees, on average. National magazines and catalogues using both heat and hardiness zones will show 4 numbers. Again using nepta x faassenii as an example, (4-8. 8-1), the first 2 numbers are the cold hardiness zones and the last 2 are the heat zones. There are 12 heat zones, with 12 being the hottest.

The Sunset Climate Zones go from 1-33 and incorporate average cold and hot temperatures but also include latitude, elevation, ocean influence, air patterns, mountains, and microclimates, all of which have an impact on plant survival. The Sunset Western Garden Book provides detailed maps and characteristics of each zone, where it describes zone 7 as the gray pine belt (a.k.a. foothill and digger pines) with hot summers and mild winters ranging from 9 to 23 degrees. Although the Sunset system is the most comprehensive and predictive of likely survival, it is the least widely used by magazines, catalogues and those doing plant labels.

The zones are a general guide, or starting point, but there are many other factors to consider. For example, azaleas, hostas, dogwood and astillbe are zone 7 plants. However, in lower elevations, the intensity of the heat and long drought conditions make them difficult to grow, even though they are rated as zone 7. Nepeta x faassenii is rated for zones 1-24 indicating that it will grow anywhere in California. But in reality, to continue blooming throughout the summer, it prefers low humidity when temperatures are high.

In the Mother Lode, equally important to high and low temperatures is when and how much it rains. The long drought and high temperatures in the summer require plants equipped with special survival mechanisms. In general, plants with the best chance of surviving are those where the conditions in which they originated are duplicated. That

means those native to this area or from similar climates—such as the Mediterranean—are easier to grow. Some of the conditions to consider are: soil (e.g., clay, sandy, rich, lean, fast draining, water logged), the amount of moisture (both in the soil and in the air) and the amount of sun or shade at various times of the day.

Every yard has many microclimates. Some areas may be more like a zone 8 if they are protected. Others may be colder, like a Sunset zone 1A. For example, plants on slopes in full sun facing south experience different growing conditions than those on the north against the house. Those at the top of the hill may experience windy conditions while those at the bottom of the slope may have more frost since cold air sinks. Those in-between on the slope are in thermal belts where the weather is more moderated and with better drainage. Buildings, land masses (like hills and mountains) and large water sources can also moderate both the cold and heat. Finding the right spot, which comes closest to addressing the plants special needs will help it survive, and maybe even thrive.

Marlys Bell is a University of California Cooperative Extension Master Gardener of Tuolumne County with experience gardening in USDA Hardiness Zones 3, 5, 6, 7, 8 and 9. She likes the Mother Lode best because of the variety of plants that can be grown.