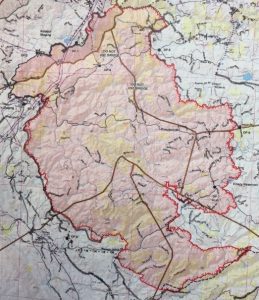 Update at 9pm: The winds blew across the Butte Fire all day long and a little rain fell, and luckily, Cal Fire Public Information Officer Shawn Sternick reports firefighters were able to hold most the lines. He adds the breeze will continue to torment crews tonight, saying, “We’re still concerned about gusts of winds that are suspected up to 45 miles per hour. This is still an active fire…we’re not letting our guard down. Crews will still be working diligently through the night hoping to make additional progress on the fire’s containment.”

Sternick says crews focus is to lengthen the lines as far as possible in an effort to beat the warmer temperatures expected to begin on Wednesday.

Update at 6:40pm:  Calaveras Unified School District (CUSD) reports due to the Butte Fire, all schools in the district will be closed through this Friday, September 18.
Superintendent Mark Campbell released this statement this evening:

“On Monday, September 21, Calaveras High School, Gold Strike High School, Toyon Middle School and San Andreas, Valley Springs and Jenny Lind Elementary Schools are all planning to open. The ability for the sites located in San Andreas to open on Monday is dependent upon the status and direction of the fire.  Rail Road Flat, West Point and Mokelumne Hill Elementary Schools will open at a later date, yet to be determined.”

Update at 6:15pm: Calaveras County Water District (CCWD) is offering free water to those impacted by the Butte Fire. CCWD spokesperson Joel Metzger reports that, due to the disaster, the district has opened up three emergency fill stations to county residents who have lost access to their water source. Potable water will provided free of charge on a temporary basis at these locations:

Metzger says the stations will be open 24/7, but not manned. The public will need to bring their own containers.

In addition, the district reports it is working closely with the Butte Fire Incident Command. “Our operations staff is providing IC with access to water supplies that can be used in key locations to combat the fire,” according to Dave Eggerton, CCWD general manager.

Update at 5 pm: Cal Fire Incident Command has released a new map of the Butte Fire footprint. It can be seen in the upper left hand box.  The last update on the fire’s size from Cal Fire put it at more than 71,000 acres and 30% contained. Sadly, the flames have destroyed 135 homes and 79 out buildings while four structures have been damaged.

Update at 4:21pm:Nearly 1,000 people in the Clinton area east of Jackson in Amador have had their power restored.

The PG&E map shows 4,526 are still without power due to the Butte Fire and the outages note “PG&E is unable to access the affected equipment.” The outage to the southeast of Jackson was listed at 1,424 yesterday and today there are 505 a decrease of 919 outages. Click here for the map.

No firefighters have been injured battling the blaze and there have been no fatalities in the Butte Fire.

Update at 3:15pm: The winds have kicked up this afternoon along the Butte Fire footprint. CAL Fire Public Information Officer Shawn Sternick says it is creating problems on the fire lines. “The wind is not working in our favor. We’re getting strong winds…we don’t have any reports of any extreme fire behavior, but at this point it’s definitely caused some flare-ups. We do have another 48 hours until Wednesday when the temperatures get back into the 90s…We’re trying to use this window in our favor to get ahead of the fire and make good progress. That’s where we are right now on fire suppression.”

A notable area where a flare-up occurred is near West Point, where the additional mandatory evacuation orders were issued this afternoon.

Update at 2:10pm: The Calaveras County Sheriff’s Office reports that there is increased fire activity this afternoon near West Point. A mandatory evacuation order has been issued for Woodhouse Mine Road, Stanley Road, and Rabbits Foot Road. Residents along those streets are advised to leave immediately. Click here to view a map of that general area.

Update at 2pm: One of the major stretches of road that remains closed due to the Butte Fire is Highway 26 from Lafayette Street to the Calaveras/Amador County line. Caltrans spokesperson Rick Estrada reports that the stretch of Highway 26 is expected to reopen  sometime Wednesday, conditions permitting.

Update at 11:55am: School has been canceled, through Wednesday, for the entire Bret Harte Union High School District, Mark Twain Union Elementary School District, and the Vallecito Union School District. As it stands right now, classes will resume on Thursday.

Calaveras Unified School District has not yet made a decision about its schedule for the remainder of the week. The district’s schools are closed today.

Update at 9:58am: Fires in California are now top priority in the nation, shifting national resources from Washington State Fires. Here is what the National Interagency Fire Center says, “California became the nation’s top priority as hot, dry, and windy conditions caused large fires to make significant runs yesterday. The Valley fire burned hundreds of homes and businesses. Thousands of residents near these fires have been evacuated. Safety of firefighters and the public is the primary concern as fire managers work to contain these fires. The National Preparedness is at Level 4 with 5 being the most prepared and 1 being the least. Level 4 means: Three (3) or more Geographic Areas are experiencing incidents requiring Type 1 and 2 Incident Management Teams. Competition exists for resources between Geographic Areas. Nationally, 60% of Type 1 and 2 Incident Management Teams and crews are committed.”

Update at 6:50am: CAL Fire reports that the size of the Butte Fire has grown, but progress was made overnight building containment lines. It has increased to 71,063 acres and it is 30% contained.

Original Story at 6:30am: Governor Jerry Brown will speak this morning about the Butte and Valley Fires.

The Governor will receive a briefing with CAL Fire head Ken Pimlott at the State Operations Center, just outside of Sacramento, and then provide an update at around 9:30am.

For the next day’s coverage of the Butte Fire click here.