Special Session on Transportation
Last month, Governor Brown called a special session of the legislature to address the state’s crumbling transportation infrastructure. I have been appointed to serve on the Transportation and Infrastructure Development Committee during the special session.
Anyone who drives in California is aware of the poor condition of our roads, highways and bridges. Maintenance has been ignored for decades, despite the fact that the state has continued collecting money from the taxpayers for that purpose. As a result, we are now faced with a monumental problem. I want to make sure my colleagues consider solutions that do not involve higher fees and taxes for Californians.

Senate Republicans have introduced two measures that do not require additional taxes or fees. Senate Constitutional Amendment X1 1 (SCA X1 1), introduced by Senator Bob Huff, a Republican from San Dimas, and co-authored by 32 legislators, would constitutionally guarantee that the billions in transportation taxes paid annually by California drivers are used only for transportation purposes. After all, shouldn’t money collected for transportation be used for that purpose and not raided for other pet programs?

In the last five years, the state has raided over $5 billion in fees and transportation taxes that were supposed to be used for road maintenance and used that money for other programs. Using that money as intended would put a substantial dent in the amount needed each year to rebuild our roadways.

Streamlining regulatory process for road repair
As another aspect of the transportation special session, I have introduced a measure that will spur action on projects to repair and maintain existing roadways more quickly by streamlining the environmental review process. Currently, projects of all kinds are delayed as they wind through a bureaucratic maze known as the California Environmental Quality Act (CEQA). My legislation expands upon a bill signed into law earlier this month (Assembly Bill 323 by Assembly Republican Leader Kristin Olsen) that streamlines the CEQA process for projects to repair, maintain, and make minor alterations in existing roadways. AB 323 was limited to communities of 100,000 or less where my proposal would include all communities throughout the state.

The need for regulatory reform is an issue I have worked on throughout my legislative career. So many businesses are impacted by unnecessary and duplicative local, state, and federal regulations that reform is needed. I hope to ensure businesses and important projects, such as transportation or water infrastructure, are not unduly delayed through a series of bureaucratic maneuvers.

Tenaya Lodge at Yosemite Honored at State Capitol
Tenaya Lodge at Yosemite was recognized on the Senate floor with a Legislative Resolution recognizing the lodge’s 25th anniversary. Paul Ratchford, the Regional General Manager, his wife Kristie Ratchford, and Marketing Manager Kathrin Poetter were on hand to accept the Resolution on the Senate Floor.

Tenaya Lodge at Yosemite is located just a few miles from the south entrance of Yosemite National Park. When the lodge opened in 1990, Yosemite National Park reported 3 million visitors annually. That number has soared to 4.5 million and continues to grow. Tenaya Lodge plays an integral role in ensuring that visitors to the park are able to experience the majesty of Yosemite. It has also maintained a long tradition of supporting and giving back to the community – donating, on average, more than $100,000 a year to local non-profits and schools. It was a pleasure to recognize the 25th anniversary and I wish them continued success in the years to come. 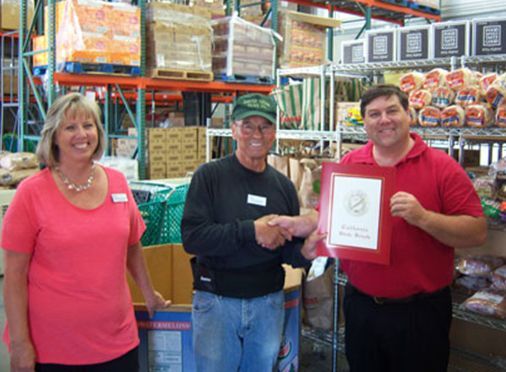