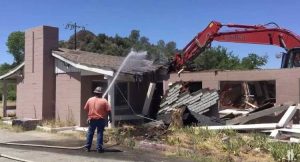 Jamestown, CA– The demolition of Rosalinda’s Gentlemen’s Club and Motel located along Hwy 108 in Jamestown began yesterday. It has been four months since an undercover investigation justified a warrant to search the business resulting in ten people being booked into the Tuolumne County Jail.

The Sonora Sheriff’s Office reports crews arrived this morning to continue the demolition of the building that once served as a strip club and found several transients asleep inside. Sheriff’s Deputies responded to clear the building and assure there was no other people inside so it was safe to proceed with demolition. Crews will remain on the property throughout the week to clean up debris.

The business was condemned following a law enforcement raid on March 1 where 10 people were taken into custody. Later, on March 13, a fire started just before 3am in the hotel area and spread to the strip club, caused major damage to the structure. Details are here. After the fire, on March 27, the owner turned herself in as reported here.