Wrong Place At The Wrong Time 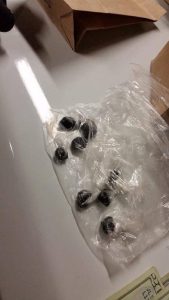 Jamestown, CA — A home search for one person on probation instead netted three other arrests and drugs in Jamestown.

Ironically, the original probationer the Tuolumne County Sheriff’s High Risk Supervision Team was looking for on Monday afternoon was not at the mobile home on Golden Dove Lane during the raid. However, the team did not leave empty handed.  Inside the trailer was 29-year-old Dustin Stevens, 30-year-old Ashley Leal and 38-year-old Gina Cook. A search revealed that Stevens had eight small baggies of heroin and nearly four grams of methamphetamine.  Heroin was also found on Cook who in addition was wanted on two felony warrants for violating a Calaveras County Post Release Community Supervision. Drug paraphernalia was retrieved on both women as well. All three suspects were taken into custody facing drug charges.

Deputies also discovered a stolen motorcycle on the property, which was released to the California Highway Patrol (CHP). Clarke Broadcasting contacted the CHP regarding the bike. Officials indicate it is a 1988 Honda Annex 650 that was stolen out of Columbia on Oct. 2nd and the owner has been notified of its recovery. Its theft remains under investigation.

Of note, all there suspects have had previous run-ins with the law. As reported here, Stevens was arrest in February at Walmart after another shopper tripped him while he was being chased by deputies. He was being sought for an earlier incident where he allegedly stabbed a family member before taking of his ankle monitor and fleeing the scene. As reported here in 2014, Cook was wanted for two felony drug warrants and was spotted at the Inns Of California where she was arrested. Leal was arrested at the Junction Shopping Center after deputies found her in a stolen vehicle with drugs stashed in her bra, as reported here.