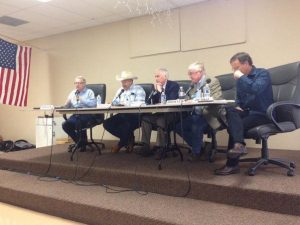 A drought water crisis forum was held over the weekend at the Black Creek Park in Copperopolis. Those in attendance heard from experts and legislators about ways to support efforts seeking to prevent continuing water releases.

We previously reported about the controversial releases that are designed to benefit fish downstream. Lake Tulloch Alliance spokesperson Jack Cox states, “What is happening at Lake Tulloch is only a microcosm of what is happening throughout the region in the impact of the drought.” Pointedly, he adds, “The problem is, with the fisheries using water to…supposedly help fish, when that process does not work and the science does not support it, we’re wasting precious water when we are dumping water out of Melones, and subsequently out of Tulloch, down the river, to achieve a goal that it does not achieve.”

All support stopping “fish flows” during drought times. Experts have noted that without the water releases for fish over the past four years, New Melones Dam may have had closer to one million acre-feet in it by the end of summer. Current projections are that the reservoir may run as low as 118,000 acre-feet, leaving critics to point out that the estimated missing difference is enough to supply Sacramento’s city water needs for two years.

The forum organizers and supporters also urged attendees to contact the State Water Resources Control Board (WRCB) in support of a tentative agreement reached last week by the Tri-Dam partners and federal agencies that would cover water management of New Melones releases through September 30, the end of the current water year. The agreement, which must be approved by the WRCB, is expected to be voted on at its next meeting in two weeks.

Last week, McClintock, who chairs the Federal Lands Subcommittee of the Natural Resources Committee and is a member of both the Natural Resources Committee and Subcommittee on Water, Power and Oceans, introduced House Bill 1668 “Save Our Water Act.” As reported here, the legislation aims to suspend federal and state agencies from making future water releases to adjust river water temperatures during extreme times such as conditions of exceptional drought.