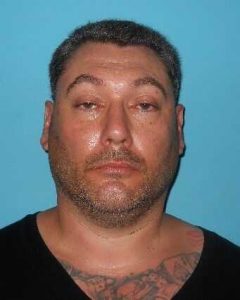 Jamestown, CA – A traffic stop in Jamestown led to the arrest of a man wanted for burglary, harassing and making threats against a woman and her child.

A passing Tuolumne County Sheriff’s Deputy recognized, 39-year-old Daniel Parsons, driving a Cadillac on Highway 108 and pulled him over recently at the intersection of Chabroullian Lane.  A records check showed that the license plates did not match the Cadillac. It also revealed that Parsons was wanted in connection to a report of threats made just a few days before at a home on Railbed Road in Jamestown.

Sheriff’s spokesperson Sgt. Andrea Benson relays that Parsons had been repeatedly sending threatening and harassing text messages along with phone calls to a woman.  She adds that he had allegedly broken into the victim’s home on several occasions, frightening the victim and her child.

A subsequent search of Parsons also turned up a counterfeit $100 bill. He was arrested for burglary, stalking, and willful cruelty to a child. His bail is set at $52,000. The license plates on the Cadillac were returned to the rightful owner.

This is not Parsons first brush with the law. As reported here, in 2015 he was arrested for attempted grand theft for allegedly trying to make off with an antique horse drawn wagon in front of the Foothills Café on Stockton Road. Additionally, in 2016 he was taken into custody for armed robbery and other charges out of Calaveras County, as detailed here.