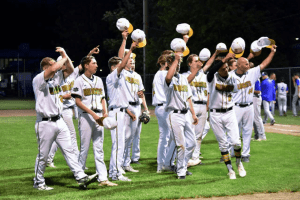 Sonora, CA – Despite a heartbreaking loss in the second round of the divisional playoffs, the Sonora High Boys Varsity Wildcats baseball coach considers his team and season a success.

As reported here, on Tuesday, led by pitching ace Tyler Matyshock, the Wildcats won their first round challenge in the CIF Sac-Joaquin Division IV playoffs, shutting out El Dorado 3-0. Coach Chet Winham calls it a sweet “revenge” victory since that team knocked Sonora out of play last season.

Thursday night, the team traveled to play Central Catholic with Josh Dutra, recently promoted to a starting position, throwing the first 80 or so pitches. “He keeps good hitters off balance and some of the hitters from Central Catholic were monsters,” Winham recounts. “He did a good job to keep them from hurting us.”

The Wildcats drew first blood, scoring a run in the first answered by Central Catholic. Then the game became a defensive pitching battle for four innings. Winham acknowledges his team got a little tired in the fifth inning as their challengers singled, stole a base, took advantage of an errant throw for a score on a sacrifice, and got a walk. While the Wildcats earned another run in the sixth, he says the team could not string together enough hits together to come back, and ultimately lost 4-2.

Recalling early season challenges, the coach confides, “When we started really working on our small ballgame, that’s when we started to score runs and win games. We asked a lot of our pitchers and defense…the kids were asked to play a brand of baseball that is not easy — and they figured it out — and I am very proud of them.”

“He is a fantastic player who is going to go on to play at the next level. He is a 4.0-plus grade-point average with D-1 athletic ability,” Winham enthuses. “We are just off the beaten path. He will [probably] go to a junior college, have a season there, and then someone will pick him up.”

Winham says his whole team deserves recognition, including assistant coaches, Ricky Pinocchio, Jon Moberg and Josh Schultz, who played a big part. “We had cohesion and a coaching staff that had great camaraderie…made it all come together, and the kids recognized it. It reflected on them and they did the same as a team.”