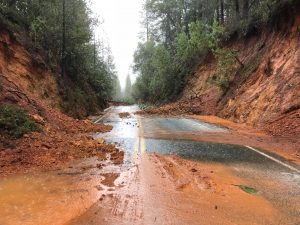 Sonora, CA — Two local counties are part of a state of emergency proclamation by Governor Gavin Newsom asking for federal recovery funds due to the recent torrential rains.

Today, the governor added Amador County and four others to a list of 21 other counties that already included Calaveras County. Newsom made the declaration after a heavy storm led to the worst flooding in 20 years in one county and the death of a man in another. A series of “Atmospheric Rivers” systems swept across the California in the January and February resulting in high winds that caused widespread power outages. The storms also brought heavy snowfall and rain that produced dangerous flash flooding, causing mud and debris slides along with ground erosion.

The Russian River in Sonoma County crested at more than 46 feet (14 meters) Wednesday night, flooding about 2,000 buildings. More than 200 miles (322 kilometers) to the north, a man drowned in floodwaters while trying to reach his home, where three children were trapped.

The governor’s entire emergency declaration can be viewed below:

WHEREAS beginning on January 5, 2019, an atmospheric river system swept across California, bringing high winds, substantial precipitation, and flooding, significantly impacting counties throughout the State; and

WHEREAS atmospheric river systems continued to impact California throughout January and into February 2019; and

WHEREAS beginning on February 12, 2019, another significant atmospheric river system swept across California, resulting in additional widespread damage; and

WHEREAS these winter storms caused damage to critical infrastructure and to roads and highways throughout the State; and

WHEREAS under the provisions of Government Code section 8558(b), I find that the conditions caused by the winter storms, by reason of their magnitude, are or are likely to be beyond the control of the services, personnel, equipment, and facilities of any single local government and require the combined forces of a mutual aid region or regions;

WHEREAS under the provisions of Government Code section 8625(c), I find that local authority is inadequate to cope with the magnitude of the damage caused by the winter storms;

All agencies of the state government utilize and employ state personnel, equipment, and facilities for the performance of any and all activities related to this state of emergency consistent with the direction of my Office of Emergency Services and the State Emergency Plan.
The California Department of Transportation shall formally request immediate assistance through the Federal Highway Administration’s Emergency Relief Program, United States Code, Title 23, section 125, in order to obtain federal assistance for highway repairs or reconstruction.
The Office of Emergency Services shall provide assistance, as appropriate, under the authority of the California Disaster Assistance Act, California Government Code section 8680 et seq. and California Code of Regulations, Title 19, section 2900 et seq.
I FURTHER DIRECT that as soon as hereafter possible, this proclamation be filed in the Office of the Secretary of State and that widespread publicity and notice be given of this proclamation.