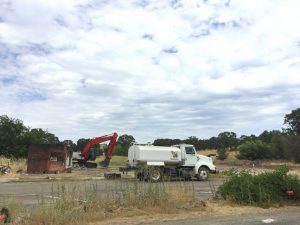 As reported here, demolition began last week on the derelict property, which became even more of an eyesore in recent months following a suspicious fire set within days of a law enforcement bust in March that resulted in more than a dozen arrests.

Tuolumne County Community Resource Agency Code Compliance Officer Doug Oliver recounts that the demo, which took through last Friday to complete, will cost the county about $60,000, which also figures in penalties, asbestos testing, abatement, garbage cleanup and abandoned vehicle removal. As reported here, back in June an earlier estimate given was around $400,000, which would have been a major budget hit for the county.

Still owned by Rosalinda Aponte Sanmartin, who is facing multiple felonies relating to maintaining ad operating a drug house, the property is legally on shaky ground. Oliver confirms that from the point where the county served its initial property condemnation notice, his office communicated her through her attorney on the violations and the county’s intentions to correct the violation if she did not.

He maintains, “No meaningful effort was made to protect the public so the county acted through contract to abate all violations. He adds that the full cost is being calculated and the owner will shortly receive a demand for payment through her attorney with a time limit to pay the county.

If that does not happen, Oliver says county can collect unpaid accruals though lein, assessment, and/or a court judgment against the owner. As he puts it, “Any of these options could result in the owner losing the property for non-payment of accrued costs and penalties.”

As Oliver points out, the now razed site of the former strip club, which over the years has also served as a restaurant and motel court is commercial use zoned, but could house one single-family residence. To view photos taken near the completion of the demolition, click into the image box slideshow.