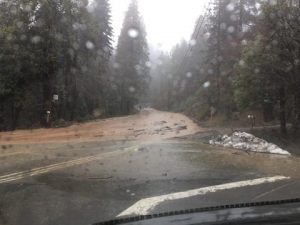 This is the second time Tuolumne county has been included in a declaration related to winter storm damage.  As reported here, another one was approved by the President in mid-February.  Deputy Administrator and Office of Emergency Services (OES) Coordinator Tracie Riggs notes the funds are greatly needed, “Tuolumne County has significant damage and some roads have been semi-permanently closed. They range from Marshes Flat Road, which has been closed, to Evergreen, Italian Bar and Kewin Mill roads, which are the primary damaged roads.”

The request for this latest approved declaration was made by Governor Jerry Brown earlier this month, as reported here. It covers emergency work and repair or replacement of facilities damaged from January 18 – 23. The funds are available to state, local and tribal governments as well as nonprofit groups with a funding split of 75 percent federal reimbursement, 18.75 percent state and a county share of 6.25 percent. Without the feds, the state would foot 75 percent and the county 25 percent.  It is a huge costs difference, as Riggs explains, “Just the county of Tuolumne has approximately 7-million in road damages…If we only had a California Disaster Assistance Act that share of cost would normally be almost $1.8 million. With the federal proclamation, it takes it from $1.8 million to $400,000…and those are both rounded numbers, but it’s a huge different on the local level.”

The White House says that other declarations may be made later depending on damage assessments. Riggs indicates a third disaster declaration request, which includes the county, is already in the works regarding February’s storm damage with the total costs still being determined. She adds there could be a fourth depending on reports of rain next week, stating, “The ground has still not had sufficient amount of time to really absorb all the moisture. If we were to get another atmospheric river as they [National Weather Service] were calling them and we had eight to ten days’ worth of rain again, I think we would absolutely experience more issues across the state.”