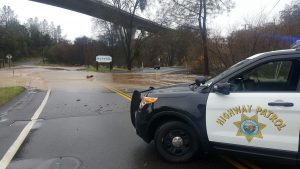 Update at 7 p.m.:  Tuolumne County Office of Emergency Services (OES) reports that Old Oak Ranch is an alternative route for residents in the Cedar Ridge subdivision. It is only for essential travel and should be avoided if possible. Traffic will be allowed with flaggers on each end with a pilot car leading one-way traffic. Sheriff’s officials report that county roads will be conducting a safety inspection Wednesday morning to determine the damage on Kewin Mill. (Click here for details on a Red Cross shelter in Soulsbyville.)

Update at 3:30 p.m.: Middle Camp Road is closed to motorists at Hawk Lane in the Twain Harte area due to downed PG&E and AT&T lines. Crews are on the scene working to restore power to 19 customers there.  The estimated time of repair is by 4 a.m. Wednesday. The CHP asks motorists to take alternate routes to avoid this area.

Update at 2:30 p.m.: In Calaveras County, there are traffic alerts on two highways. Flooding stretching across Pettinger Road at the Highway 12 intersection and a landslide on the westbound lane of Highway 26 at the Peregrine Road intersection has slowed traffic.

Update at 1:30 p.m.: The CHP reports Bergel Road west of Phoenix Lake Road has been closed due to flooding. There is no word as to when it will be reopened to travel.

Update at 11:45am: It remains unclear when Kewin Mill Road will reopen to vehicle traffic. The road remains closed from Comstock Ranch to Belleview School. A county road supervisor is on scene and is hoping that the rain will subside and the water will recede. At this time the county roads department does not have an estimated time of reopening.

Some residents in the area have been taking Pack Trail, to Old Oak Ranch Road, as an alternate route around the flooding.  However, Tuolumne County Office of Emergency services stress only first responders are allowed to use this roadway. All other travel is restricted in this area due to the unsafe conditions. We’ll pass along more information as it becomes available. For an overall update on storm damage; the new temporary bridge on Kewin Mill, other county issues and the current Tuolumne County State of Emergency read this news story.

Update at 10:35am: Kewin Mill Road is closed, between Comstock Ranch and Belleview School, due to roadway flooding.

Original story posted at 8am: Sonora, CA — There are some road closures in Tuolumne County this morning due to flooding and rock slides.

The Tuolumne County Community Resources Agency reports that Old Priest Grade is closed due to a rock/mud slide. In addition, Red Hill Road and Sims Road are both closed due to flooding. You will need to avoid those areas.

To view the latest information from the National Weather Service, click here.