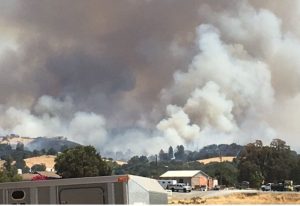 San Andreas, CA — The woman accused of recklessly setting what became a 450-acre fire with her car failed to appear in Calaveras County Superior Court today. A warrant has been issued for the arrest of West Point resident, Renee Hogan, to bring her back to court to answer for charges related to recklessly causing the Willow Fire.

As reported here, Rene Ilene Hogan, 44, appeared for a pretrial hearing in September. At that time she was in jail, having not made the $132,500 bail that was previously set. She was due in court for another Pre-Preliminary Hearing today. Hogan has plead not guilty to each of nine charges, a DUI, and denied an enhancement. The full account of charges relating to the incident were detailed here.

The blaze, which ignited Aug. 28 in San Andreas, off Mountain Ranch Road near Willow Creek Road grew to 450 acres in just three hours. It damaged a house and surrounding forest lands, caused mandatory evacuations, and took three days to fully contain. CAL Fire officials determined from multiple witness reports and its own investigation that the fire was sparked at several points by a driver, allegedly Hogan, driving some distance on the rim of a flat tire.