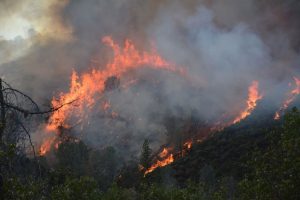 Update at 7:30 p.m.: Highway 49 remains closed for Wednesday night but Cal Fire hopes to reopen it to one-way traffic control Thursday at 8 a.m. Cal Fire spokesperson Nancy Longmore updates, “Steep, rocky terrain and limited access is creating on-going difficulties with the construction of over 12 miles of fire line. Rolling material, such as rocks and  burning logs, are making for unstable footing and hazardous work conditions at all times, but especially during nighttime darkness.”

As reported here, Cal Fire has determined what sparked the blaze.  The number of personnel on the scene has increased to 940 with resources totaling 105 engines, 27 bulldozers, 17 water tenders, 36 fire crews. In the air are two air attacks, six tanker and four helicopters.

Check out a video in the upper left-hand image box with a firefighter from the fire line detailing the biggest problem in battling the blaze.

Update at 6:20 p.m.: The containment on the Marshes Fire burning near Moccasin climbs to  38 percent while the acreage holds at 1,000.

Update at 3 p.m.: As the containment has hit 30 percent on the Marshes Fire and the acreage is holding at 1,000, one firefighter revealed what crews are facing on the fire line.  Clarke Broadcasting caught up with some firefighters coming off the front lines…Firefighter Jeremy Brandt from the Ventura, California gave this insight, “It’s hot  and a lot of work still to be done. ” More of Brandt’s interview can be seen in the video in the upper left-hand image box along with some pictures.

The flames are burning off Highway 49 and Marshes Flat Road in Moccasin. A stretch of Highway 49 remains closed to Coulterville.

Update at 9:10am: Tuolumne County Sheriff’s Office spokesperson Sgt. Andrea Benson reports that Marshes Flat Road is now open to the general public if accessed from Blanchard Road. There are two ways to access Marshes Flat Road. Blanchard Road comes out on the Don Pedro community side, and it is clear and open.

Original story posted at 8:20am: Moccasin, CA — CAL Fire reports the Marshes Fire is up to 30% containment and it is holding at 1,000 acres.

Crews are making progress, as the Tuolumne County Sheriff’s Office reports all earlier evacuation orders and advisories have been lifted. Highway 49 remains closed from Moccasin to Coulterville due to firefighting activity, according to the CHP. Marshes Flat Road re-opened last night only to residents that live in that area. PG&E has restored power to the area and the Red Cross shelter at the Hacienda in La Grange is now closed.

Around 850 firefighters remain on scene this morning, including 79 engines, 30 crews, 27 dozers, nine water tenders, six air tankers and six helicopters. Resources are being utilized from 68 different agencies. Crews will continue to work today towards constructing additional containment lines. Fire suppression has been difficult due to the steep and rugged terrain, combined with dry and hot conditions. What ignited the fire, at 12:20pm on Monday, remains under investigation. It is burning near the intersection of Marshes Flat Road and Highway 49 near Moccasin.

Click here for a recap of the fire’s progression from yesterday.