Update: Firefighters Get Some Containment On Marshes Fire 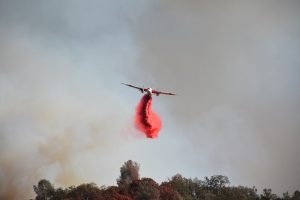 Update at 6:30 p.m.: Cal Fire reports that firefighters are getting a handle on the Marshes Fire burning along the intersection of Marshes Flat Road and Highway 49 near Moccasin. There is now 25 percent containment and minimal growth on the fire from 930 to 1,000 acres. Cal Fire spokesperson Nancy Longmore notes that all evacuations have been lifted and residents are being allowed back into their homes. However, Marshes Flat Road is only open to residents and Highway 49 remains closed from Moccasin to Coulterville. Longmore also gave an update on the injured firefighter that stating, “It ultimately turned out to be a minor injury as apposed to a life threatening serious injury. Good news for us and the firefighter.”

What sparked the blaze remains under investigation.

Update at 6:10 p.m.:  Tuolumne County Sheriff’s officials report that Marshes Flat Road is now open to residents only and power is being restored to the area. Sgt. Andrea Benson states that law enforcement will remain on scene throughout the night to allow residents to return to their homes. Highway 49 will remain closed from Moccasin to Coulterville.

Update at 2:30 p.m.: Cal Fire reports one of the nearly 850 firefighters assigned to the Marshes Fire was injured battling the blaze. CAL Fire spokesperson Nancy Longmore states, “A firefighter was injured and they’ve airlifted that fire fighter to a Modesto hospital.” Longmore did not have any further details on how the firefighter was hurt, their exact injuries or condition.

The acreage is still holding at 930 with zero containment. A mandatory evacuation order remains in effect for the Moccasin Ranch Estates and an advisory evacuation for the homes immediately east of the Hetch Hetchy headquarters on Highway 49. Longmore stresses that the Hetch Hetchy plant is not threatened. Highway 49 remains closed near the fire, from Moccasin to Coulterville.

Update at 10:15am: Due to the heavy amount of resources, 847 firefighters, base camp for the Marshes Fire has moved to the Calaveras County Fairgrounds outside of Angels Camp. Yesterday the incident command post was situated near the Hetch Hetchy headquarters on Highway 49. There are currently 79 fire engines, 27 crews, 13 water tenders, four helicopters and two dozers. The latest size estimate remains 930 acres and no containment. There are no new evacuations this morning. The mandatory evacuation order remains for the Moccasin Ranch Estates and the advisory evacuation notice for the couple of homes immediately east of the Hetch Hetchy headquarters.

Original story posted at 8:30am: Moccasin, CA — Nearly 850 firefighters are assigned to the Marshes Fire this morning, according to CAL Fire spokesperson Lindy Shoff.

The fire, situated near Moccasin, is 930 acres and there is still no containment. Highway 49 remains closed from Moccasin to Coulterville. A steady stream of aircraft will be flying overhead again today in hopes of getting a handle on the blaze. What ignited the fire, during the noon hour yesterday, remains under investigation. A mandatory evacuation order remains in effect for the Moccasin Ranch Estates and an advisory evacuation notice is issued for the homes immediately east of the Hetch Hetchy headquarters on Highway 49. An evacuation center remains open at the Hacienda at 5182 Fuentes de Flores in the community of La Grange.

Click here for a recap of the fire activity from yesterday.