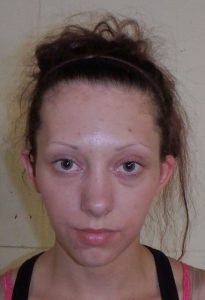 According to Sonora Police Chief Mark Stinson, officers recently responded to the 300 block of Fairview Lane for a vehicle parked in an unauthorized area. Inside were a man later identified as Luke Nunes, 22 of Sonora and his passenger, Tiffany Morris, 22 of Columbia.

As Chief Stinson recounts, “While they were talking to her, she actually identified herself as another individual, gave that individual’s name and birthdate. Officers were able to trip her up during questioning on some other information that they knew about the person that she was claiming to be – and while they were talking to them [officers] also noticed some controlled substances on the dash of their vehicle.” A loaded syringe later determined to be full of oxycontin fell from near where Morris was sitting, he adds

A subsequent records check also revealed Morris had three active “no bail” warrants for her arrest for burglary, identity theft and the third failure to complete conditions of a work release program. As reported here, Morris was arrested early last December in connection with a theft from a local church.

Continuing with details about the vehicle search, Chief Stinson states, “Several items were located in the truck that did not belong to them, such as a driver’s license, credit cards and a fishing license.” It turned out that some of the items were similar to those taken in recent thefts from the Tuolumne City area. “What the officers did was contact the people whose names appeared on the items,” Stinson explains. “Then they came down and they identified the items with their names on them along with some of the other items that were inside the truck, such as two one-ounce bars of gold that were taken in a recent theft, along with some miscellaneous jewelry and some fishing equipment.”

Morris and Nunes were taken into custody without incident and transported to the Tuolumne County Jail. Morris was booked for felony false impersonation of another person and misdemeanors for possession of prescription medication and drug paraphernalia. Nunes was booked for felony possession of stolen property as well as misdemeanor possession of prescription medication and drug paraphernalia. Chief Stinson says more charges may be forthcoming as some of the items found in the vehicle have not yet been identified and may be related to other recent thefts.

As reported here, Nunes was recently arrested for felony possession of a concealed weapon and other drug charges.