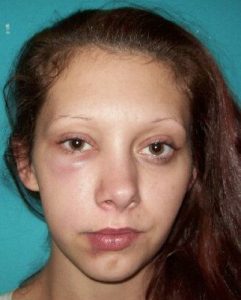 Sonora, CA — A woman has been arrested for stealing from a local church.

According to the Tuolumne County Sheriff’s Office, on Sunday, after reviewing video surveillance, deputies investigating an alleged burglary at Harvest Fellowship Church in Sonora thought they recognized the culprit by the subject’s tattoos that were visible in the footage. Sheriff’s spokesperson Sgt. Andrea Benson states that the church had earlier contacted the office to report that a female entered the church building and left with a television and a tote bag full of items that included restroom paper products. Deputies subsequently located and confronted a local woman, Tiffany Morris, with the video evidence and she admitted to the burglary.