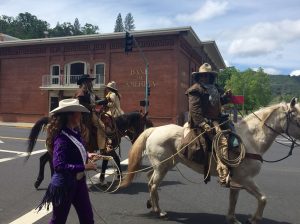 Coyote Sam and his gang of misfits ride through Sonora

Sonora, CA — Coyote Sam and his gang of bandits once again called Tuolumne County Sheriff Jim Mele out of the annual Mother Lode Round-Up Sponsor’s Luncheon to have a mock showdown on Washington Street. Briefly disrupting traffic at the Washington Street and Stockton light, a few confused motorists and a small crowd watched the mock shootout.

Bandits on horseback circle the block firing blanks into the air and stop at Emberz to call Sheriff Mele to come outside. The Sheriff’s Posse and Round-Up Queen contestants; Annie Torok,  Samantha Turner, and Karissa Rogers as well as the Junior Queen contestants; Shyanne Clopton, Lynsey Gookin, Kaitlyn Rumsey, and Ginna Hahn take on the bandits. Playful jeers are shouted from both sides. The bandit’s gun fire is quite loud but was met with water from squirt guns from all the contestants as Sheriff Posse members fired in the air back. Eventually the chaotic scene ends with the villains leaving with an item needed for the Round-Up which will later be found and returned.

The Mother Lode Round-Up, now in its 59th year, is held this year on May 7th and 8th. The parade, events in the weeks before the Round-Up, and ticket prices are in our Community Round-Up Section here.

The Coyote Sam event is amusing each year, photos and video from last year are here, and 2014 is here.