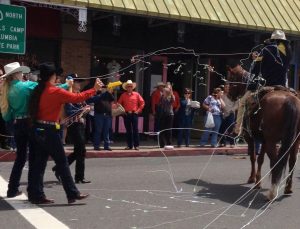 Guns blazing, the bandits on horseback raced down South Washington Street once again trying to stop the Mother Lode Round-Up.  A mock gunfight broke out between the outlaws and the Sheriff’s Posse as the outlaws harassed the Round-up Queen Contestants.

Coyote’s gang called Tuolumne County Sheriff Jim Mele out of the annual Sponsor’s Luncheon to a showdown in the street.  Coyote Sam held up Sheriff Mele for the Sonora Mining Water Company’s “Certificate of Water Rights” in hopes of stopping the Round-up.  With the certificate in hand, Coyote Sam and his outlaws rode off to bury the paper somewhere in the county, and the public has to find it.

“This year is going to be the hardest it’s ever been,” says Coyote Sam, “People are going to look high and low, up and down, and in and around; nobody is gonna find it this year.  I guarantee it or my name ain’t Coyote Sam.”

This will be the 57th year of the Mother Lode Round Up and it will be held on May 10 and 11th.

Click here for a schedule of all the upcoming events.