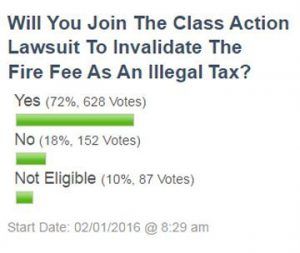 One of this week’s informal myMotherLode polls was “Will You Join The Class Action Lawsuit To Invalidate The Fire Fee As An Illegal Tax?” A Sacramento Superior Court Judge ruled last week that citizens may either join in or opt out of a class action lawsuit against the $150 fire fee.

The lawsuit, filed by the Howard Jarvis Taxpayers Association, challenges the constitutionality of the fee and claims it is really a tax. In 1978, Proposition 13 passed, requiring a two thirds majority of the legislature to approve a property tax increase. The current lawsuit also notes that the fire fee goes into the general fund and not all the funds collected go to support fire prevention. More details are in the news story “Class Action Status For Fire Fee Lawsuit” here. Property owners, an estimated 825,000, have 30 days to file a protest after they receive a fire fee bill.  The bills go out intermittently throughout the year.

In other polls, our two day poll asked “Is Your County Supervisor Doing A Good Job Of Representing You?” The results were 40 percent ‘no’ and 35 percent ‘don’t know.’

A question about Trump not attending the Fox News Republican debate received 56 percent ‘doesn’t matter.’ Trump received one less delegate than Ted Cruz after the Republican Caucus in Iowa.  The New Hampshire Caucus is on Tuesday, Feb 9.

The current poll asks our myMotherLode poll takers if they went to Yosemite this year. The poll has been up one day and currently the results are at 75 percent ‘no’ with over 400 votes. Yosemite visitor numbers hit a 19-year high in 2015 with 4.3 million people passing through the park gates. Details are in the news story Record Breaking Attendance at Yosemite here.