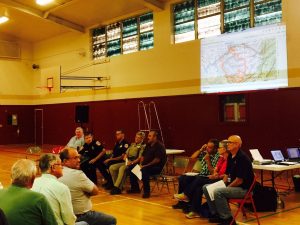 Update at 8:30pm: As firefighters increase the containment by three percent while holding the acreage at 70,760, Cal Fire Public Information officer Josh Rubinstein indicates all overnight fire suppression efforts are focused on returning residents to their homes. He says, “The fire behavior remains minimal, but they [fire personnel] are working diligently to expedite repopulation. We want to extinguish the fire, make the area safe so people can return home…resume a normal lifestyle, if you will, or start establishing a foundation so they can begin rebuilding their lives.”

The number of fire personnel battling the blaze has dropped to 4,164. Resources on the scene include 385 engines, 54 water tenders, 92 hand crews, 46 dozers,10 helicopters and 5 air tankers.

Update at 6:50pm: Cal Fire reports the Butte Fire size sticks at 70,760 acres while the containment has risen to  63%.  The number of homes lost to the flames also rose to 503 residences and 330 outbuildings with 47 structures damaged.

Update at 6:05: More progress on the Butte Fire as more advisory evacuation notices are lifted in Calaveras County.

Here is the information just released by Cal Fire:

Update at 4 pm: Cal Fire wants to update residents impacted by the Butte Fire. The Incident Management Team I has announced two community meetings in Amador and Calaveras Counties to provide information and a general overview of the blaze with the discussion centering around community needs and fire suppression.

Here are the times and locations according to Cal Fire:

Update 2:45 pm: Calaveras County Water District (CCWD) wants to clear up confusion regarding a boil water advisory issued in Sheep Ranch since water service was restored this morning. District officials state the advisory is ONLY for 48 customers in Sheep Ranch. CCWD spokesperson Joel Metzger says that all other district service areas are operating normally and the water is completely safe to drink. He adds the goal is to lift the Sheep Ranch boil advisory on Sunday, Sept. 20; if state-mandated testing comes back negative for potentially harmful bacteria.

As reported Monday, Calaveras County Water District (CCWD) is offering free water to those impacted by the Butte Fire. CCWD spokesperson Joel Metzger reports that, due to the disaster, the district has opened up three emergency fill stations to county residents who have lost access to their water source. Potable water will provided free of charge on a temporary basis at these locations:

Metzger says the stations will be open 24/7, but not manned. The public will need to bring their own containers.

Additionally, Calaveras Public Utility District has set up three free emergency water fill stations for those impacted by the Butte Fire at these locations:

CPUD provides water service to the communities of San Andreas, Mokelumne Hill, Rail Road Flat, Glencoe and Paloma, many of which are impacted by the Butte Fire.

Update at 10:15am: CAL Fire is allowing additional evacuees to return to their homes this morning.

The following information became effective at 10am, according to CAL Fire:

Mandatory Evacuation orders for the following have been changed to Evacuation Advisories:

(Some areas of the Communities of Mountain Ranch and Jesus Maria)

4) Mountain Ranch Road is closed at Avenue A

Evacuations Advisories have been lifted in the following areas:

1) The City of Angels Camp and Altaville

2) All residences and roads west of Hwy 49, including west of Calaveritas Road from

Original story posted at 6:50am: There was no new growth on the Butte Fire overnight. CAL Fire reports this morning that the fire is 70,760 acres and 60% contained. The number of homes destroyed remains 365, and the number of outbuildings gone is 261.

There are 4,327 firefighters still assigned to the incident. There are 414 engines, 54 water tenders, 10 helicopters, five air tankers, 92 hand crews and 59 dozers.

The following road closures are in effect this morning, according to CAL Fire:

CAL Fire has released the following information this morning about where evacuations are still in place:

All areas inside the fire perimeter, South of Calaveras River

All areas and roads South of Mountain Ranch Rd and Sheep Ranch Rd inside the fire perimeter.

All areas and roads East of the intersection of Mountain Ranch Road and Upper Michel Road inside the fire perimeter.

All areas of Jesus Maria are under Mandatory Evacuation EXCEPT for the following (the following areas are open):

1) Hawver Road: Hawver Road from Goldstrike Road to the intersection of Hawver and Doster Road.