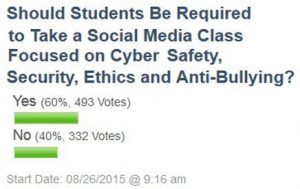 A recent informal myMotherLode poll asked “Should Students Be Required to Take a Social Media Class Focused on Cyber Safety, Security, Ethics and Anti-Bullying?” The results were 60 percent for such a class and 40 percent against. The same poll question asked January 2014 was 53 percent Yes and 46 percent No. California’s
bullying and hate-motivated behavior prevention for parents, administrators, and students on how bullying can be prevented and addressed is here.

A Pew Research Center Study on Teens, Technology and Friendship released August 6th reports “76 percent of all American teens use social media, with 71 percent using Facebook” The report notes “many teens use the term “drama” to describe conflict between peers, often in lieu of the term bullying. In this most recent study, 68% of teens who use social media have witnessed people stirring up drama on these platforms.” The study found that more than three-quarters (78%) of teens say they do not feel worse about their own lives based on what others post to social media, while 21% of teens say they do. The report found that 68% have received support on social media during challenges or tough times.

Sonora High School has heard concerns over bullying, and especially cyber-bullying in classes, as previously reported, earlier this month the issue was reported as “currently being addressed” by the school’s standing committee on wellness, according to Sonora Union High School district superintendent Patrick Chabot.

Back in February Tuolumne County schools hosted the the “Stop It” campaign to end bullying on campuses. A total of 275 students from 7th through 12th grade representing every school district in Tuolumne County, along with teachers and school administrators, attended the 3rd Annual conference-style Anti-Bullying Summit on the Columbia College campus.

Common Core Literacy standards outline requirements for students beginning in third grade to learn how to use the internet for research.