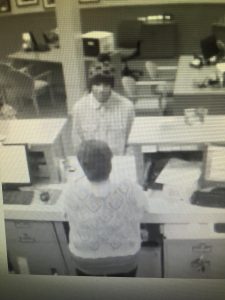 Sonora, CA — One of two alleged robbers of a local bank has been nabbed, apparently caught by surprise earlier today in Solano County.

According to Tuolumne County Sheriff’s Department spokesperson Sgt. Scott Johnson, this morning, 18-year-old Daevon Marquell Harris, most recently of Vacaville, was taken into custody. Harris was being sought under a warrant subsequent to the July 21 bank robbery of the Umpqua Bank in Twain Harte, as previously reported here.

While not in police custody at the time, Harris arrested at the Solano County Court House, after appearing in court on an unrelated charge, according to Sgt. Johnson. “When he was done in court on that charge, Solano County Sheriffs deputies informed him he had a bank robbery warrant on him out of our county and took Mr. Harris into custody,” Johnson explains.

Harris is now currently residing in the Solano County Jail, pending transportation into the Tuolumne County Jail, where he will be detained until answering his bank robbery charges. “He’ll at least have the bank robbery charge against him at this point — that was what the warrant was for,” Johnson says. However, he states, “There’s some additional investigation that still needs to be done…our detectives will be interviewing Mr. Harris.”

Johnson adds that the other robbery suspect, who has been identified but not named due to being a minor, remains at large and is considered armed and dangerous. Bank surveillance images of both can be viewed by clicking in the left image box. Anyone with additional information should call the Sheriff’s Office at 209-533-5815. The FBI is also involved in the investigation.

Update Jan. 20, 2016: Harris was found guilty and sentenced to six years in prison/ Judge Donald Segerstrom gave him credit for 138 days already served, ordered $1,800 in restitution and $7,437 be paid to Umpqua Bank in Twain Harte.