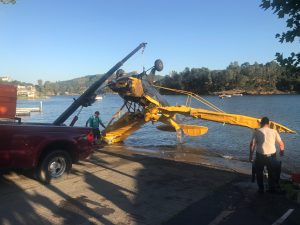 Update at 2:30pm: A family friend of the pilot who perished in the plane crash at Lake Tulloch has released a statement on their behalf.

Modesto City Councilmember Bill Zoslocki on Wednesday issued a release to the public, identifying himself as a close family friend of Trent Johnson, the 58-year-old Modesto deceased pilot. He indicated he was a former student of pilot Dave Mesenhimer, Johnson’s father-in-law, who died in a plane crash just over a dozen years ago. Zoslocki added that the statement would be the only communication from the family for now.

Zoslocki noted, “Trent Johnson had a passion for flying. Since he was a little boy he dreamed of flying, eventually getting his pilot’s license and marrying into a family who also loved to fly…Trent died on Sunday, Father’s Day, while doing something that gave him such great joy.”

The communication continued with a statement from Johnson’s wife, Sarah Mesenhimer-Johnson. “Our three boys and I are deeply grieving,” she shared. “Right now we are dealing with a sudden and yet repeated tragedy. Never would we have imagined that the boys’ beloved father would be taken from us 13 years after their grandfather — my Dad — died in the same manner.”

At the foot of the communication Zoslocki noted, “The family appreciates the prayers and support from their friends but asks for the consideration and respect of privacy until details of a service can be worked out.”

Update at 11:50am: Calaveras County Coroner Kevin Raggio has positively identified the pilot killed in the Father’s Day plane crash on Lake Tulloch.

He reports that the deceased is 58-year-old Trent Johnson of Modesto and that he confirmed the finding with the pilot’s family this morning. The plane was registered to Johnson and he was apparently doing a flyby and wing dip for friends over the lake when his craft struck power lines and immediately plummeted, nose first into the water, where searchers located it at a depth of 110 feet Monday. A salvage recovery boat extracted it yesterday.

An autopsy to determine the cause of death is pending before the end of the week.

Original Post at 10:37am: Copperopolis, CA — Emergency responders have removed the deceased pilot and small aircraft that crashed into Lake Tulloch on Sunday.

The plane was located by sonar equipment, around noon, the following day, Monday, about 110 feet below the water’s surface.  Specialized units and teams began the process of lifting the plane out of the water at around 10am on Tuesday and efforts concluded last night. The pilot was reportedly removed from the plane around the halfway point, while the aircraft was still submerged in the water.

Officials have not yet formally identified the pilot, as family members are still being notified.  The pilot was planning to do a flyover at Lake Tulloch, near Poker Flat, but unfortunately hit power lines. The plane then went head first into the lake. The incident occurred shortly before noontime on Sunday.