Update: Suspect Silent In Jail As Homicide Victim ID’d As Half Sister 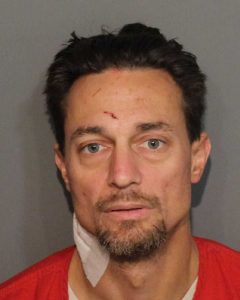 Update at 2:37pm: A man recently captured near a burning vehicle is facing murder among other charges as county officials release the victim’s name and other details.

County Coroner Kevin Raggio says his office ID’d the victim using dental records as 49-year-old Toni Jilbert of Manteca, adding that she was the half-sister of Fagundes, found near the scene of a May 30 vehicle fire on Lower Telegraph Road near Highway 4 in Copperopolis. The incident was originally reported as a crash.

Jones adds that Fagundes, currently represented by the Public Defender’s Office, remains in county jail custody with a $2 million bail. His next court date is set for Friday, June 21, in Department 1 of the Calaveras County Superior Court.

Original Post at 2:27pm: San Andreas, CA – A man recently captured near a burning car remains in jail as officials declared the case a homicide and released the identity of the deceased female found inside.

According to Calaveras County Coroner Kevin Raggio, his office positively identified the victim using dental records as 49-year-old Toni Jilbert of Manteca. He adds that she was the half-sister of 41-year-old David Joseph Fagundes of Washington State, found near the scene of the May 30 vehicle fire on Lower Telegraph Road near Highway 4 in Copperopolis.

As earlier reported here, the incident, initially reported as a crash, occurred in the 7 a.m. hour and the Calaveras County Sheriff’s Office found a deceased person after the fire extinguished.

Investigators on scene learned that prior to the arrival of fire responders; a person on site might have attempted to extinguish the fire with a hand-held extinguisher. Officials, who remained at the site throughout the day eventually spotted Fagundes hiding in a nearby field.

However, when detectives approached him in the high grass, Fagundes reportedly declined to comply with their demands for contact, stating he had a firearm. He also made threats toward law enforcement and suicidal statements. The SWAT Team and K9 Knox subsequently took him into custody by force.

According to Sheriff Rick DiBasilio, Fagundes has remained silent while in custody at the jail and investigators do not know whether he was the person who might have attempted to put out the vehicle fire.