Update: One Of Two Fugitives Caught 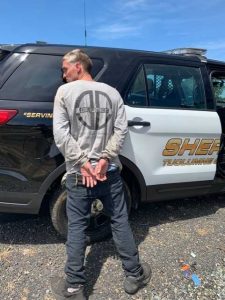 Update at 7:20 p.m.: The third and last suspect, who has been running from the law for more than two days after fleeing from a traffic stop on O’Byrnes Ferry Road in the Jamestown area on Thursday morning, is in handcuffs — spotted while hitchhiking.

Tuolumne County Sheriff’s spokesperson Andrea Benson tells Clarke Broadcasting that 26-year-old Parolee Robert Graham of Ceres was trying to catch a ride on Highway 108 near La Grange Road in the Jamestown area on Saturday afternoon, when a person called in to dispatch wondering if he might be the final fugitive still at large. Sgt. Benson details that the description matched one of the suspects, so deputies headed to the area.

When deputies caught up with Graham, he admitted he was the man they were seeking. Sgt. Benson also revealed that the Ford Ranger pickup that the suspects fled in and ultimately crashed before taking off on foot was stolen.  She adds that Graham actually thanked the deputies for saving his life as his mugshot in the image box shows his face was sunburned and he was treated for possible dehydration. He faces possession of stolen property and evading charges.

Further details on their alleged crimes and the captures of his accomplices, a Modesto woman and a Jamestown man, can be viewed below.

Original post at 9:50 a.m.: Jamestown, CA – A second suspect from Jamestown who has been running from the law for more than a day after fleeing a traffic stop has been tracked down as a result of a tip from the public.

Tuolumne County Sheriff’s Officials continued their manhunt yesterday (Friday) for two men wanted in connection to a vehicle chase and crash stemming from a burglary at a Calaveras County business. Two men and a woman took off running after their Ford Ranger pickup smashed into a sign at the entrance of the Sierra Conservation Center along O’Byrnes Ferry Road in the Jamestown area. Sheriff’s spokesperson Sgt. Andrea Benson tells Clarke Broadcasting that dispatch got a break Friday afternoon when a clerk from a business in that area reported finding a sleeping man in their shop.

Upon their arrival, deputies found 35-year-old Matthew Manuel, who matched the description of one of the fugitives, inside the store. Sgt. Benson says he admitted he was one of the individuals who fled from the truck on foot. She adds that after being treated for dehydration, Manuel was arrested for possession of stolen property and evading. The arrest photo in the image box shows Manuel with no shirt on and his back red from sunburn.

As reported here Friday afternoon, sheriff’s officials released the name of a woman, 21-year-old Anatasia Laughlin of Modesto, who was arrested on those same charges. Deputies were able to chase her down within minutes of her running from the wrecked pickup.

One male accomplice remains on the loose and anyone with information related to this case is asked to call the sheriff’s office at 209-533-5815.