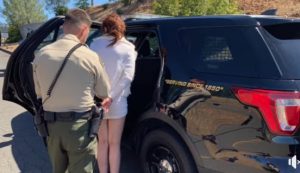 Jamestown, CA – While her cohorts remain on the loose, Tuolumne County Sheriff’s officials have released new information including the identity of a woman allegedly involved in a theft, chase and crash by the Sierra Conservation Center yesterday.

As reported here Thursday morning, spotting a Ford Ranger truck driving erratically on O’Byrnes Ferry Road in Jamestown, a Tuolumne County Sheriff’s Lieutenant attempted to pull over the pickup. Instead, the driver took off, but the chase ended minutes later as the truck crashed into a sign in front of the prison. The driver and his two passengers, another unidentified man and a woman took off on foot. Reportedly a search of the pickup uncovered items linked to a burglary at a Calaveras County business earlier in the morning.

The woman was caught immediately by deputies, but her name was not released until today. Sheriff’s spokesperson Sgt. Andrea Benson says she is 21-year-old Anatasia Laughlin of Modesto. She faces possible charges of possession of stolen property and evading arrest. Her bail is set at $10,000.

Sgt. Benson relays that her two male partners are still being sought in connection with the theft and for evading arrest. She adds that the stolen items have been returned to the business owner, but did not have details on what those items were.