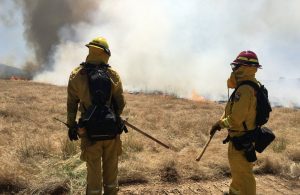 Update at 1:30 p.m.: CAL Fire reports that crews just wrapped up the prescribed burn on the north end of the dam on New Hogan Lake.

Original post at 1 p.m.: Valley Springs, CA – Smoke filled skies in the Valley Springs area are a result of a prescribed burn targeting fuels in the area of a traditional 4th of July event.

As reported here this weekend, today CAL Fire is burning 8 to 10 acres of grasses along the shoreline of New Hogan Lake in Valley Springs as precautionary measure ahead of the “Fireworks over New Hogan” pyrotechnics show to take place over the 4th of July holiday. The Hogan Fireworks Fuels Reduction burn began this morning and is expected to last several hours. The CAL Fire helicopter 404 out of Columbia is flying overhead to watch for hotspots.

Smoke was also visible in the same area of the county yesterday, as can be seen in the image box pictures, after crews set ablaze a 280 acre prescribed burn in Springs Valley between Copperopolis and Valley Springs. As earlier reported here, fuels were ignited to reduce infestations of medusahead grass, a noxious weed, while also allowing for live fire training.  That burn was supposed to take place last week, but was called off it was determined that the weather conditions were not right to spark a prescribed burn.

CAL Fire asks the public not to report today’s smoke as a wildfire.