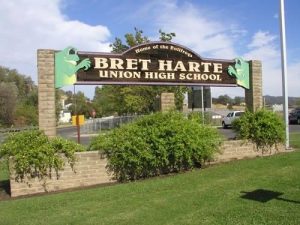 The Bret Harte High School Athletic Hall of Fame selection committee selected 15 individuals and one team for this year’s class.

The selection criterion primarily considers achievements as Bret Harte High school student-athletes and coaches, although character values during and after their high school years are a major consideration, officials note. Last year was the Bret Harte High’s Athletic Hall of Fame inaugural year, as reported here.

The induction will take place during “Hall of Fame Weekend,” scheduled for Friday and Saturday, Oct.4-5. Inductees will receive introduction at the Friday home football game and honors at a dinner and induction ceremony the following night. Tickets to the dinner are available to the public for $35 each, beginning Aug. 14.

The Class of 2019 Bret Harte High Athletic Hall of Fame honorees are as follows:

To read about the Class of 2018 honorees, click here.