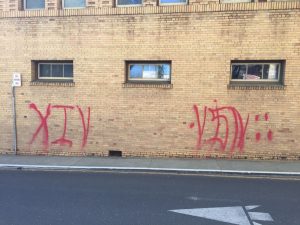 Sonora, CA — The Sonora Police Department reports that a man turned himself in last night and admitted that he was responsible for vandalizing several areas of the city.

Sonora Police Spokesperson Krishna Livingston says, “At about 7:35pm, the suspect, Daniel Nichols, came to the police department and informed us that he was here to turn himself in for defacing several areas of the city with red spray paint. An officer contacted him, and Nichols was apologetic and remorseful for his actions, and said he had been heavily intoxicated.”

Nichols was arrested and transported to Tuolumne County Jail for felony vandalism. The Police Department indicates that he is 23 years old and from Tuolumne County.

We reported last week that at least nine areas were tagged with the red paint during the evening of April 22.