Third Time Is Not A Charm For A Twain Harte Woman 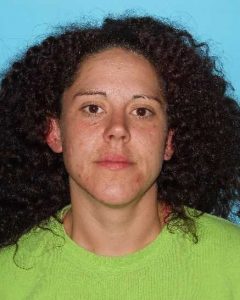 Sonora, CA – A Twain Harte woman has been taken in to custody three times in a little over a week with two of those arrests involving firearms.

With two other consecutive arrests of 30-year-old Tanya Dunlap just three days apart, she is now facing several felony drug and illegal weapons charges. Her first arrest came on a Saturday (April 6) and included a chase and a loaded .45 caliber hand gun. The second was the following Monday (April 8th) where a sawed off shotgun was uncovered in a vehicle search after a traffic stop. In both incidents, as earlier reported here, she was charged with being an addict in possession of a firearm.

Early this past Monday morning, a Tuolumne County Sheriff’s Deputy stopped a Jeep Grand Cherokee on Hess Avenue in Sonora for not having a license plate light. Dunlap was behind the wheel along with two passengers and all were on probation. That’s when the nose of K9 Zeus sniffed around the vehicle and alerted the deputy to the presence of drugs. During a search inside the vehicle, drug paraphernalia was found in Dunlap’s purse.

After being arrested and while heading to the jail, the deputy noticed that Dunlap was shifting around in the back seat of the patrol vehicle. When asked, she denied having any drugs and ignored his warning that bringing narcotics into a jail is a felony offense. Subsequently, while given a body search during booking into the jail, a small baggie of methamphetamine was found on her thus tacking on that additional charge. Dunlap’s bail was set at $25,000.