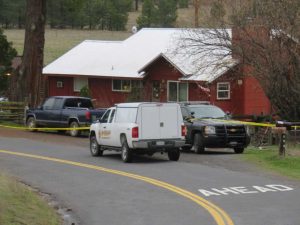 Groveland, CA – Tuolumne County Sheriff’s Officials have released new details in the shooting death of a woman in her Groveland home.

Originally investigators declared it a suspicious death, but declined to rule it a homicide. Deputies responded to a call on the morning of March 5th reporting that a woman had been found with a gunshot wound at her home on Smith Station Road near Highway 120 in the Groveland area.  At the time, Sheriff’s officials told Clarke Broadcasting that deputies on the scene relayed the situation needed further investigation “based on evidence that they observed,” as reported here.

After several calls to the newsroom from worried residents in the area wanting to know if a murder had taken place, last week we inquired via an email whether a cause of death had been determined. Today, Sheriff’s spokesperson Sgt. Andreas Benson replied, “The death of a woman on Smith Station Road earlier this month has been ruled a suicide. Foul play has been ruled out.”

The woman’s name is not being released.