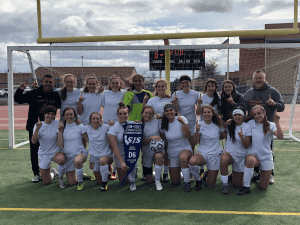 Sonora, CA – The Summerville Bears Girls Varsity Soccer team gave it their all, but came up short in their playoff game against Ripon.

The two teams battled it out for the right to continue on their chase to capture the CIF Northern California Regional Girls Soccer Championship Division 5 title. The game was scoreless through the first 40 minute half, but the second half resulted in 3 goals by the Bear’s opponents. In giving his replay of the game to Clarke Broadcasting, Summerville’s Coach Dave Marquez shared that the goals came sporadically, and added, “We had a few scoring opportunities, but couldn’t get any in the net.”

The final score in today’s game was 3-0 in favor of Ripon. As reported here yesterday, which includes the names of all the Bear players, Ripon was the fourth seed while Summerville was fifth after coming off of a win against the Golden Sierra Grizzlies of Garden Valley and taking Sac-Joaquin Division 6 title. Despite the loss, Coach Marquez had this reaction, “I look back on the 18-19 season as being an absolute success for the Summerville girls program. I couldn’t be more proud of them. It was an outstanding year. We brought home a section title and we’re really happy about that.”

It’s a title the school has not held since 2001. There are 19 players on this year’s  roster with this being the final season for five seniors. Coach Marquez recalled the past season, adding, “We’ve been playing in the winter since the first week of November when we started practice. So, to be committed and play through four months of winter like we did and to be as successful as we were – I just couldn’t be any happier with the team.”