Update: How Much Did The Storms Boost Sierra Snowpack? 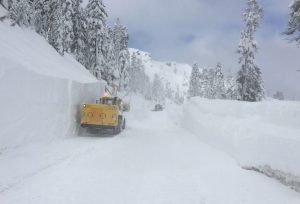 Update at 1:30 p.m.: This week’s stormy weather has not only brought good news regarding the snow pack, but also for California’s continued drought figures.

The already very wet winter has greatly reduced drought conditions in the state, according to the U.S. Drought Monitor. It reported today (Thursday) that more than 34 percent of the state including the Sierra Nevada, much of the Central Valley and the San Francisco Bay Area is free of any significant dryness.

The monitor also says heavy rains removed most of the moderate drought designation that stretched from the Central Coast down to the southern portion of the state, shrinking the abnormally dry designated areas. What remains is just over 10 percent of California in the far north and south categorized in moderate or severe drought. The year began with less than 8 percent of the state being free of any drought or abnormally dry conditions. Further details on the wet weathers impact on the snowpack are below.

Original post at 9:50 a.m.: Sonora, CA — The California Department of Water Resources reports this morning that the recent storms have put the Sierra Nevada snowpack well above average for the date.

When the last manual readings were taken about a week ago, we reported that the figure was around 100-percent of average for February 1st. The DWR electronic sensors now indicate the statewide average is closer to 123-percent for the date. The Northern Sierra is 109-percent, the Central Sierra is 126-percent and the Southern Sierra is 135-percent.

Dodge Ridge Ski Resort reports receiving a combined 73-inches of snow over past three days. A similar amount fell at Bear Valley, where the resort was even forced to close on Tuesday, but has since reopened.

The lower foothills continue to dry out today after heavy snow fell in areas as low as downtown Sonora, Jamestown, Columbia, Murphys and Angels Camp. Light snowflakes were even reported for a short period in Central Valley communities like Merced.

More snow is in the forecast over the coming days. Click here to view the latest from the National Weather Service.