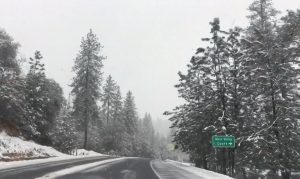 There are two vehicles stuck on Fir Drive at Highland Drive as well. They are also providing traffic control as a vehicle is being extracted in White Oak Estates in the area of of Autumn Court and Crystal Falls Drive.

On Phoenix Lake Road at Bellview Creek a posted detour is still confusing some motorists, who are apparently getting stuck on Fortuna Mine Road. Among the defective signals motorists are having to deal with due to the local power outages are the one on Highway 108 at Soulsbyville Road and on Highway 49 at the Parrots Ferry Road off-ramp.

Update at 2:05pm:  The CHP Sonora Unit reports on Phoenix Lake Road at Belleview Creek a posted detour is confusing some motorists, who are apparently getting stuck on Fortuna Mine Road.

Too, they report a stuck semi-truck on Longeway Road near Colorado Drive, east of the Phoenix Lake-Cedar Ridge area.

In Twain Harte, two vehicles are reported stuck in the middle of the roadway on Fir Drive at Highland Drive. There is also a reported accident on Longeway Road at Niagra River Drive.

Update at 12:50pm: CHP Sonora Unit officials say there are are defective traffic signals on Highway 108 at Soulsbyville Road.

There is also a reported traffic hazard with no further details between Buck Meadows and Dogtown, located at the intersection of Greeley Hill and Jordan Creek roads. Officials are apparently still dealing with an earlier accident on Highway 49 at Shaws Flat Road and defective traffic signals at the Highway 49 Parrots Ferry Road off-ramp.

Update at 9:25am: There are some new traffic hazards to be aware of in the Mother Lode. The CHP reports that a big rig truck is jack-knifed on Parrotts Ferry Road near Union Hill Road. On Longeway Road, near Phoenix Lake Road, there is a tree limb hanging over the roadway that is close to the ground. There is also a non-injury crash on Highway 108 near Confidence Road. Continue to allow plenty of extra time when traveling today due to the icy conditions.

Original story posted at 7:20am: Sonora, CA — Vehicles are getting stuck and spinning out in various areas this morning due to the icy roadways.

Highway 108 near J-59 has been an area of major concern this morning. The CHP reports that multiple vehicles have spun out and at least two have gone down an embankment. 12-15 vehicles are stuck on the side of the highway due to the icy conditions. Caltrans is dispatching a truck to pass through and drop additional sand on the road. There is a solo vehicle crash on O’Byrnes Ferry Road near the Highway 108 intersection. In addition, a CAL Fire engine is stuck on Hunts Road near Longeway Road.

Also, the stop light is out at the Parrotts Ferry Road and Highway 49 intersection.

To read an earlier story about power outages and school delays, click here.