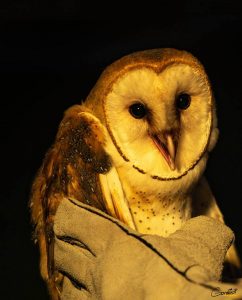 Barny on the night of his release in August

Angels Camp, CA – All alone, frightened and fluttering his wings while found on the ground in Angels Camp’s Utica park, a barn owl, appropriately named Barny, is now flying high over the Mother Lode.

Described as a “little fur ball,” his parents were nowhere to be found that hot summer afternoon in June when he was discovered. An Angels Camp police officer was not sure how to capture the small owlet, as earlier reported an earlier story here, but his wife did. She immediately contacted Mother Lode Wildlife Care, a non-profit animal rescue.

Clarke Broadcasting got this update on the owlet that can be seen in the image box pictures with his rescue volunteer Laura that helped him grow into a beautiful, bright eyed owl. Animal rescue officials relay that the young bird would likely have not survived without her nurturing and skilled expertise. That labor of love was rewarded when Laura was able to set Barny free as the care group notes he “was clearly ready to reenter the wild and take care of himself.”

It was only fitting that Laura released Barny on a warm summer evening in August at the same park where he was found abandoned. As Barny took flight, witnesses remarked that his wings made no sound, but his feathers shined in the moonlight and within seconds he disappeared into the night sky.