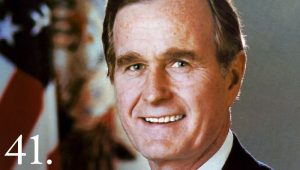 Update at 5:30 p.m.: Tuolumne County Library officials have announced that all branches will be closed on Wednesday (Nov.5) in observance of the holiday.

Original post at 2 p.m.: Sonora, CA – Although county offices will be closed Wednesday as the day has been declared a federal holiday by President Donald Trump to mourn the death of former President George H.W. Bush, area students are expected in the classroom Wednesday.

That holiday announcement led Tuolumne County officials to put out a statement that most county offices will be shut down in observance, excluding Public Safety and the Recorders Office, as reported here yesterday. Today, Tuolumne County Superintendent of Schools Marguerite D. Bulkin confirmed to Clarke Broadcasting that schools will remain in session, stating, “ Absent executive order from the Governor, the County Schools Office is remaining open tomorrow during the National Day of Remembrance as an essential service to the children we serve.”

Bulkin’s counterpart in Calaveras County, Scott Nanik, relays the same is true for schools there. Additionally, Calaveras County officials detail that all county offices will be closed except for essential services, which include the sheriff’s office, snow removal, emergency road works and landfills/transfer stations.