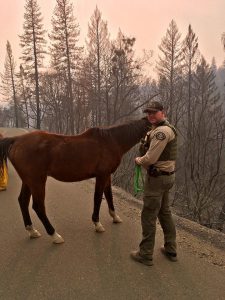 Sonora, CA – Tuolumne County Sheriff’s Deputies are on the ground assisting in Camp Fire rescue efforts by rounding up lost and frightened animals along with other aid efforts.

As seen in pictures in the image box, deputies have rescued several horses and cattle in the Concow area of Butte County. It is northeast of Paradise, the town that was completely wiped out by the mega fire.

Other mutual aid being provided by the deputies include assessing damage to the area, conducting welfare checks on animals and residents, feeding livestock that owners were forced to leave behind due to the fast moving flames and providing overall security for the evacuated areas, according to sheriff’s officials.

As earlier reported here, the death toll continues to rise with 42 confirmed deaths, but hundreds of people have been reported missing.  The blaze has destroyed over 6,700 structures and has grown to 125,000 acres and is 35 percent contained.