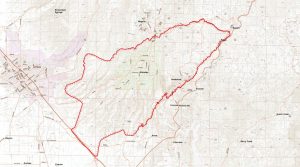 Update at 1:30 p.m.: Five people were found dead in their burned-out vehicles after the blaze incinerated most of the town of Paradise with a population of around 30,000. Fire officials say that the flames moved so fast there was nothing firefighters could do.

“There was really no firefight involved,” CAL Fire Capt. Scott McLean, who went on to explain, “Crews gave up attacking the flames and instead helped people get out alive.” He noted that firefighters were in rescue mode all day Thursday.

Currently, the mega fire is 70,000 acres and just 5 percent contained. CAL Fire estimates that 2,000 structures have been destroyed, including business and homes while another 15,000 are threatened. Resources on scene include 303 engines, 11 water tenders, 59 hand crews, 18 helicopters and 24 dozers. CAL Fire reports that out the of over 2,300 fire personnel, three firefighters have been injured battling the blaze, but did not release any further details on their injuries or conditions. As reported below, resources from the Mother Lode have been deployed to assist in fighting the flames.

The blaze began as a vegetation fire Thursday around 6:30 a.m., but what ignited this deadly and devastating fire remains under investigation. Further details on this fire and two in southern California are below.

Original post at 7:35 a.m.: Resources from across the state, including the Mother Lode, are being dispatched to help fight a growing mega fire in Butte County.

Officials say the fast-moving Camp Fire decimated the town of Paradise (population 27,000) yesterday afternoon. The Associated Press reports that it sent residents racing to escape on roads that turned into tunnels of fire as thick smoke blanketed the daytime sky with darkness.

The fire has exploded to over 20,000 acres and there is no containment.

In addition, two large fires ignited in Ventura County in the Los Angeles region. The Hill Fire is over 10,000 acres and the Woolsey Fire is 2,000 acres. There is no containment.