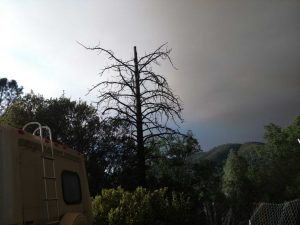 This is Day 6 coverage of the Ferguson Fire, more updates are here.

Update at 11:45am: Smoke is blanketing the Mother Lode today due to the Ferguson Fire burning in Mariposa County. The incident command team reports that winds have been blowing in multiple directions as a thunderstorm is expected to pass through the area of the fire later this afternoon. Back-burning operations, where they fight fire with fire, are also scheduled throughout today as conditions allow, which causes additional smoke.

On a related note, the classic car show scheduled for this afternoon at the Junction Shopping Center in Sonora is cancelled due to the air quality. Also, today’s Tuolumne County rabies clinic scheduled for Groveland has been cancelled.

Original story at 7:45am: El Portal, CA — There remains just five-percent containment on the 17,319 acre Ferguson Fire in Mariposa County.

The incident command team reports this morning that there are 1,850 firefighters assigned, 158 engines, five water tenders, five helicopters, 44 hand crews and 16 dozers. There has been one firefighter death and two firefighter injuries.

An evacuation center is open at the New Life Christian Fellowship at 5089 Cole Road in Mariposa.

The incident command team reports that today crews will continue to monitor and mop up in the areas around Cedar Lodge, Indian Flat, and Cold Canyon. They will begin contingency line construction up Pinoche Ridge from the Merced River, improve dozer and hand lines around Yosemite West and Jerseydale, and take suppression action to keep the fire East of Snyder Ridge. They will also use aerial resources to try to keep the fire on top of Ferguson Ridge when conditions permit.

The fire continues to put out heavy smoke across the region.

An 18 mile stretch of Highway 140, near the fire, remains closed.