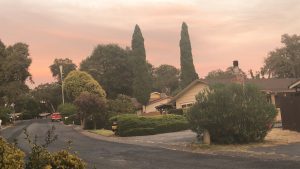 This is Day 5 coverage of the Ferguson Fire, updates are here.

Update at 7:20pm: This evening the Ferguson Fire is estimated to be 13,082 acres and still 5-percent contained. Today crews focused on structure protection in areas around El Portal, Yosemite West and Jerseydale. The fire primarily grew to the south and east with most of the growth occurring in the late afternoon when the inversion layer lifted. The fire has been backing down Ferguson Ridge, into the Sweetwater Creek Drainage and behind the Cedar Lodge.

Update at 12:10: An additional community meeting has been scheduled where residents can learn more details about the Ferguson Fire from fire officials. The meeting will be this Thursday at 4pm in the El Portal Community Hall on Foresta Road.

It is in addition to the meeting scheduled for 6pm today at the Wasuma Elementary School at 43109 Highway 49 in Ahwahnee.

Also, after restoring power to Yosemite Valley earlier, the electricity is now out at the park’s El Portal housing area. Yosemite officials note that the new outage may also effect the communities of Yosemite West and Foresta.

Update at 7:15am: The Ferguson Fire incident command team reports that lines have been re-energized restoring power to Yosemite National Park. Since Highway 140 is closed in Mariposa, there is currently no access to Yosemite via the western entrance. You can still enter the park via Highway 120 or Highway 41.The fire continues to spread south and east toward Jerseydale, Mariposa Pines and Yosemite West.

Original story posted at 6:37am: El Portal, CA — The Ferguson Fire is now estimated to be 12,525 acres and it is 5-percent contained.

The inversion layer was strong yesterday, reducing the fire activity witnessed over the previous two days. Heavy smoke limited the ability to use air attack throughout most of the day, but late in the afternoon conditions changed and the fire began to actively move southwest towards Hites Cove Road. Clearing skies allowed for retardant drops using fixed wing tankers to effectively slow the spread.

There are still big concerns on the horizon given the hot temperatures and difficult terrain and topography. Currently there are 1,486 firefighters assigned to the incident.

A public meeting is scheduled for 6pm today at the Wasuma Elementary School at 43109 Highway 49 in Ahwahnee.

The federal Bureau of Land Management earlier temporarily closed the Briceburg Visitor Center due to the fire. Also, some campgrounds along the Merced River (McCabe Flat, Willow Placer and Railroad Flat) are closed. Mandatory evacuation orders are also in place for Savages Trading Post and Ferguson Ridge Road. An evacuation advisory is in effect for Cedar Lodge and Yosemite West. Highway 140 is closed from Cedar Lodge to the top of Briceburg Grade and Incline Road is closed from Briceburg Bridge to the last BLM campground.

Highway 140 remains closed north of Mariposa due to firefighting activities and the investigation into the cause.