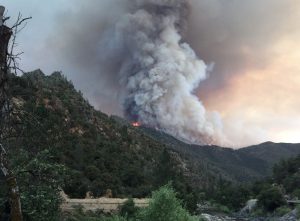 This is Day 3 coverage of the Ferguson Fire, more updates are here.

Update at 7:19pm: The Ferguson Fire remains 2-percent contained and it grew this afternoon to 4,310 acres. Crews were successful today protecting structures along the main fork of the Merced River. Firefighters are trying to hold the blaze north of Ferguson Ridge in Mariposa County. There have been a couple of spot fires over Ferguson Ridge that crews have been quickly working to slow the spread. Engines are in place to protect homes and businesses between the Cedar Lodge area and Hite’s Cove. Additional resources are arriving in the community of Jerseydale and Yosemite West to formulate structure protection plans. In the event of continued active growth, contingency fire lines are being constructed along Sweetwater Ridge, south of the fire, and Pinoche Ridge, north of the fire.

The weather is expected to remain very hot and dry over the next seven days, and there is a chance of isolated thunderstorms along the crest of the Sierra Nevada. Heavy smoke is expected to continue to be an issue across the region.

Update at 1:50pm: The Mariposa County Sheriff’s Office has added the community of Yosemite West to the list of those under an advisory evacuation notice. The homes are located south of the Yosemite National Park border. All earlier evacuation orders and advisories remain in place.

In addition, the federal Bureau of Land Management has temporarily closed the Briceburg Visitor Center due to the fire. Also, some campgrounds along the Merced River (McCabe Flat, Willow Placer and Railroad Flat) are closed.

Original story posted at 8:55am: El Portal, CA — The Ferguson Fire burning in Mariposa County is 4,000 acres and containment has decreased to 2-percent.

There are now 500 firefighters assigned to the incident, and it has been burning in steep and sometimes inaccessible terrain.

Triple digit temperatures are projected in the fire area today with a chance of isolated thunderstorms. PG&E has de-energized power lines in the area, impacting El Portal, Foresta and parts of Yosemite National Park.

The latest area to be placed under a mandatory evacuation is the community of Jerseydale in Mariposa County.

Additional air and ground resources will be arriving on scene today. Smoke has been visible in areas of Tuolumne County from the fire. What ignited the blaze is unknown.

Yesterday Governor Jerry Brown ordered flags be flown at half-staff in honor of Heavy Equipment Operator Braden Varney, 36, who died while fighting the fire. He was a 10-year CAL Fire veteran and second generation firefighter. He is survived by his wife Jessica, five year old daughter Malhea and three year old son Nolan.

To view a map of the area near the fire, click here.