Update: Fire Near Yosemite Shuts Down Highway 140, But Park Open 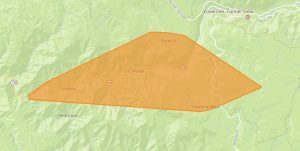 This is Day 2 of the Ferguson Fire, more updates are here.

Update at 11:20 a.m.: Columbia aircraft are assisting in fighting the Ferguson Fire burning off highway 140, between El Portal and Briceburg in Mariposa County, west of  Yosemite National Park in the Sierra National Forest.

At last update, the blaze’s acreage is holding steady at 130 and there is 5-percent containment.  Highway 140 is closed between the Cedar Lodge in El Portal and the Yosemite Bug Rustic Mountain Resort Hostel near Briceburg. Due to the fire, both lodgings have been evacuated. Yosemite National Park officials share that the park remains open, but advise travelers use alternative routes to enter the park via Highway 120 or Highway 41 as there is no anticipated time for Highway 140 to reopen.

A power outage stretching from Incline to Foresta and Yosemite West that involves 607 PG&E customers continues. Park officials add that Yosemite Valley has been impacted as lines in the canyon that provide electricity to that area have been turned off for firefighters’ safety. Currently, the utility has a 6 p.m. estimated repair time posted. Further details on the fire are below.

Update at 6:45 a.m.:  CAL Fire dispatch reports that the acreage has grown to 130 acres, but firefighters have gained 5-percent containment on what is being called the “Ferguson Fire.” Further details regarding the blaze can be viewed below.

Original post at 5:30 a.m.: Mariposa County, CA — A 50-to 60 acre wildfire burning in Mariposa County, west of  Yosemite National Park in the Sierra National Forest, between El Portal and Briceburg has shut down Highway 140.

The highway is closed between the Cedar Lodge in El Portal and the Yosemite Bug Rustic Mountain Resort Hostel near Briceburg due to the fire.  It is unknown for how long the roadway will remain closed as firefighters have been battling the blaze since around 8:30 p.m. Friday night.  Additionally, guest and staff at the two lodgings were evacuated. The flames broke out near the Savage Trading Post and Ferguson Ridge.

There are power outages stretching from Incline to Foresta and Yosemite West that involve 607 PG&E customers. The estimated repair time is 7 a.m. as the power was turned off due to the fire.