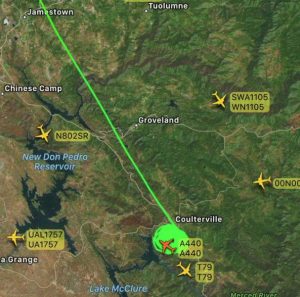 Coulterville, CA — The Wheeler Fire, which ignited during the noon hour yesterday, is 115 acres and 60-percent contained. All earlier evacuations have been lifted. There was a heavy amount of air traffic passing between Columbia Air Attack Base and Coulterville yesterday afternoon.

It is one of many notable fires that have ignited in the past week in the greater region. The Boyer Fire, also in Mariposa County, is 95-percent contained at 53 acres. It ignited on Friday afternoon along Boyer Road near Fox Hollow Lane off of Highway 49, as reported here. The flames forced a handful of residents from their homes in the Bootjack area along Sherrod Road for nearly five hours.