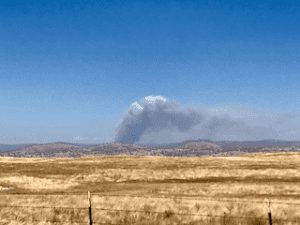 Update 6/18/18 at 6:10 p.m.: While evacuations in connection with the now 100-acre Wheeler Fire near Coulterville are lifted, CAL Fire officials say those areas involved are open to residents only and not to the public.

According to CAL Fire spokesperson Jamie Williams, the wildfire is ten percent contained. Currently assigned to the incident are 14 engines, 14 crews, one dozer, three helicopters and five overhead positions. Resources remaining committed overnight will continue battling to get an upper hand on the blaze, which is in steep terrain containing thick, heavy vegetation.

Update at 5:10 p.m.: CAL Fire officials are now advising that all areas evacuated due to today’s Wheeler Fire near Coulterville will open at 6 p.m. to residents only.

CAL Fire spokesperson Jamie Williams states that an acreage and containment update should be available around 6 p.m. Read on for the current evacuation details.

Update at 4:15 p.m.:  CAL Fire MMU Unit spokesperson Jamie Williams says fire investigators are currently on scene looking for signs and clues as to the cause of the Wheeler Fire in Mariposa County, located in the vicinity of Wheeler Gulch and Highway 49 South, southwest of Coulterville.

At last report, the blaze, which was first reported early in the noon hour at four to six acres, had grown to 90 acres and remains at zero containment and moving at a moderate rate of spread. Crews were reportedly facing challenges by steep terrain, heavy fuels and access difficulties.

While most residents may already be aware, travelers should also keep in mind that Highway 49 north and southbound in the Coulterville area remains closed approximately 15 miles from Bear Valley to the Highway 132 junction as Caltrans crews and construction partners work on extensive roadway repairs due to damage done by late March storms. Caltrans officials estimate detour times of about an hour while the work, which is expected to take through July, is underway.

Clarke Broadcasting thanks our community news partners for images. Photos and video may be sent to news@clarkebroadcasting.com.

Update at 3:15 p.m.: An evacuation shelter is in place for those forced to leave areas near the Wheeler Fire, now at 90 acres.

According to CAL Fire officials, the fire remains at zero containment and continues at a moderate rate of spread. The Red Cross has established a Shelter at Lake Don Pedro Elementary School, located at 2411 Hildago Street in La Grange. See below for current evacuations in place.

Update at 2:32 p.m.: CAL Fire officials say the Wheeler Fire is now 50 acres in size and crews are being challenged by steep terrain, heavy fuels and access difficulties.

There is still zero containment and the fire is reportedly showing a moderate rate of spread. No structures are currently under threat.

Update at 1:35 p.m.: Columbia is among the air responders to a vegetation fire in Mariposa County currently described by CAL Fire officials as 40 acres in size.

Officials say the Wheeler Fire is demonstrating a moderate rate of spread and there is zero containment. No structures are currently being threatened.

It broke out shortly into the noon hour in the area of Highway 132 and Wheeler Gulch road near Coulterville and grew  from what was initially described as four to six acres.

Original Post at 12:49: Coulterville, CA — If you notice planes in the air, Columbia is among the responders to a vegetation fire currently described by CAL Fire officials as a four to six acre blaze in the area of Highway 132 and Wheeler Gulch Road near Coulterville.

The call went out early in the noon hour and units are still in the process of responding, as officials say they are having issues accessing the area. We will bring you more details as they become available.