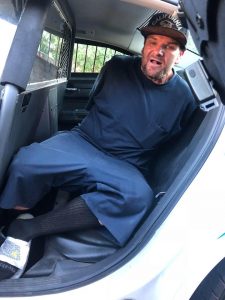 Sonora, CA — A Sonora man is behind bars for stealing his girlfriend’s cell phone prompting her to call police.

Sonora Police report that the boyfriend, 38-year-old Joshua Murray, is accused of pushing the woman and running off with her phone on Wednesday.  Murray was last seen heading towards the train tracks near Old Wards Ferry Road.

The next evening around 7:30 p.m., Murray was spotted near the police station located at 100 South Green Street in downtown Sonora. During questioning, police say Murray changed his story surrounding the events from the previous night. A search of his person turned up heroin and drug paraphernalia.

Murray was arrested for robbery and taken to the Tuolumne County Jail. Police indicate that charges will also be sought for domestic battery, violation of a court order, possession of drug paraphernalia and a controlled substance.

Murray was taken into custody earlier this year for causing a disturbance at a local motel while carrying a fixed knife blade, as reported here.